While sports networks might not be overjoyed that the NBA Finals feature the Milwaukee Bucks vs. the Phoenix Suns, Irish hoops is celebrating this match up. Two graduates of the University pf Notre Dame are contributing to "The Association" at the highest level. Monty Williams '93 —head coach of the Suns—is the first former player to lead an NBA team on the men's side. (Fun fact: In the WNBA, Bill Laimbeer '79, now with the Las Vegas Aces, is former head coach of the Detroit Shock and New York Liberty). Pat Connaughton '15 —reserve guard for the Bucks—has made his mark all season long. As a fellow alum and loyal fan, I can't decide who to cheer for. I wonder if this is how the Curry family must feel when the Warriors take on the Sixers. To pick one team is to choose Steph or Seth. What a wonderful problem to have. 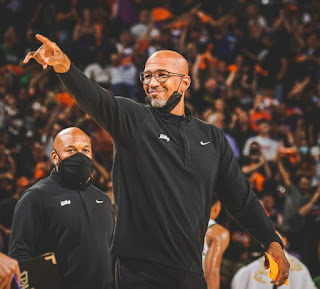 With the series tied at two games a piece, it's time to choose. I'll allow this post to give a little more information about Team Williams. I'll post the Case for Connaughton tomorrow and let you cast your own vote. Enjoy.

Team Williams
Sports fans love to create an enemy. It's easier and much more fun to cheer for your team and jeer for the other when a player or coach is unlikable, entitled, disrespectful and rude. Unfortunately for all the Milwaukee fans who yelled "Bucks in six!" Williams is anything but taunt-worthy. In fact, I find his story so incredibly remarkable, I'm not sure how you root against him.

Williams is no stranger to adversity. He is a man of faith and integrity. Thanks be to God for this because he has had more than his fair share of what anyone deserves. 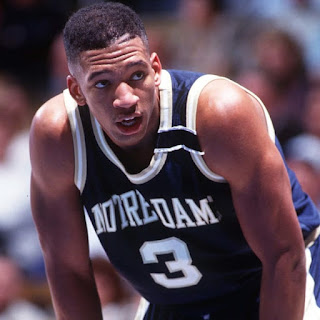 But one chapter of his trial is featured in his "Strong of Heart" profile. This series, from Notre Dame Athletics "intends to be a chronicle — to be a measure, of the growth" of the student athlete in their four years on campus. Jack Swarbrick, Director of Athletics, said, "It offers stories that represent the way this University and its athletics program impact the lives of people. These are the stories of student-athletes, former student-athletes and individuals who contribute to the environment that allows student-athletes to flourish. Their stories offer testimony to the power of intercollegiate athletics to impact lives at the University of Notre Dame." His story is scary, inspiring and faith-filled.

Williams discovered a dark cloud hovering close at hand–one that carried the potential for serious harm. During his annual physical, doctors discovered he suffered from hypertrophic cardiomyopathy (HCM), a potentially life-threatening affliction featuring a thickened muscle between chambers of the heart. A stunned Williams had no idea how to even react.

“When you’re 18 years old, you can’t process that kind of information. One day, I’m playing on the team. I’m bench pressing 300 and whatever pounds and jumping 40 inches off the ground and the next day, they tell me I can’t play basketball anymore,” Williams says. “To hear that news, it was devastating. It was something I never want to feel again. It was no emotion at all. You can’t even muster any emotion because you don’t know where to go.”

Despite seemingly having his playing career ended, Williams, sparked by his then-girlfriend and now wife Ingrid, turned to his faith to guide him through this unforeseen challenge.

“It was probably the most important time in my life because that’s when my girlfriend, who was such an example of faith and Christian living, told me that I had to get things together in my life,” Williams recalls. “God was trying to get my attention . . . that he didn’t put this on me but this was my shot to get my life together because where I was headed probably wasn’t going to be a good place.”

As one would expect, when word surfaced that Williams could not play at Notre Dame, other universities began to inquire about his desire to transfer. In what some might find to be a surprising decision, Williams recognized the need to take advantage of his other opportunities at Notre Dame while parking his basketball dreams.

“If I left Notre Dame, I knew I was going to leave something special,” Williams says. “Schools were telling me, `Come on down and we’ll take care of it.’ Right away, I knew they didn’t care about me. They just wanted someone to come down and help their program.”

For a guy that came to Notre Dame with dreams of playing in the NBA, Williams’ ability to keep perspective was unique for someone facing so much adversity at such a young age.

“I went to Notre Dame to get a job, whether it was in sports or the corporate world,” Williams says. “I knew if I stayed there long enough, I was going to get a job doing something. My biggest thing was that I never wanted to go home and be a burden to my mother. People don’t realize how special of a place Notre Dame is. I knew that being there was going to mean something someday. Thank God, I stuck it out.”

Of course, basketball could never completely leave his thoughts. Despite doctors telling him to stay away from competitive basketball, Williams played often on campus–which led to fellow students wondering why he would put himself at risk.

“I believed everything that the Bible said about healing. We prayed the prayer of faith and I just rested in that,” Williams said. “Even though the doctor said that there is a chance I could still die, the reality was that all I had was my faith and if I couldn’t lean on that, what else did I have? I kept playing with the idea that someday I was going to get to play somewhere, whether it was the CBA or overseas. I enjoyed basketball so much that I couldn’t picture my life without having basketball in it.”

In the summer of 1992, Williams no longer needed to imagine life without basketball. The 6-foot-8, 225 pound forward was cleared by doctors after his condition improved to the point that it no longer posed a threat to his life.

“When the doctor came in and told me that I was going to be able to play again, all I could do was thank God. My mom was crying and I called Ingrid and told her, `I’m going to play ball again,’ and she started crying. This time, I was able to garner some emotions. I just felt thankful. I never felt that thankful again until I had my own kids.”

As an undergraduate, I remember two things about Monty Williams. The first was that he lived on campus, in a section of Morrissey Manor known as "Dirty Thirty," Otherwise known as "DT," these rooms in the basement had ceilings that matched his height of 6'8". Gritty. The second was that he had returned to play, after a health issue involving his heart had sidelined his career. I had no idea how precarious and unsettling it must have been. As someone with a heart issue myself—one that changed my ability to engage in athletics—I understand his perspective and am happy he healed. Although nothing could prepare him for what was to come, I do believe his faith, prior tests, struggles and his survival enabled him to—at the very least—manage what was to come. 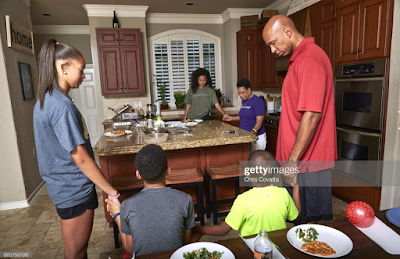 As written in Sports Illustrated, You Can't Give In by Chris Ballard chronicles his loss. In February 2016, Williams' wife and the mother of his four children Ingrid died in a car accident. In reading this piece, I thought he is a modern day Job: a good and righteous man who has been tested by God.

At times, I had to put down this article because of its tragic beauty and I know I was not the only one. As written in SI's "Inbox," Mike Campbell of Madison, TN shared "It took me two days to read Chris Ballard's story on Monty Williams in its entirety because I had to stop to cry so often. Your magazine has told many wonderful stories of human interest and compassion, but never one as strong and compelling as this one." Amen. 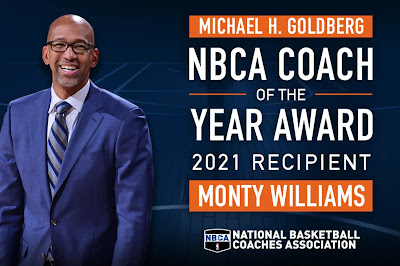 He came to coaching at the encouragement of former teammates and friends who thought it would be good for him and his five children. The Suns' organization and its fans are certainly glad he did. This year, he was conferred by the National Basketball Coaches' Association with the Coach of the Year award.

Monty Williams is an outstanding coach and if the term "Notre Dame man" is to have any authenticity or depth behind it, perhaps the definition should point to him. Kevin Durant, who worked with Monty for a season in OKC, says, “He’ll hate that I say this, but he’s the best man that I know. And that’s no slight to my dad, my godfather, my uncle or any coaches that I’ve had.” For Durant, lots of men have tried to fill the role of mentor. Most had lots of advice; few wanted to listen. Fewer still shared the hiccups in their own life. “Monty listens, allows you to vent,” Durant says, “but then he’ll bring you back in and keep it real with you.”

The Case for Connaughton will run tomorrow. Much like any family, it's not a contest, but something to celebrate.

Previous Breakfast Without Wimbledon
Next Suns v. Bucks: A Case for Connaughton