European Aquatics Championships, Budapest (HUN) – Day 7, Bondar jumps out of the world, not even 10 pieces of 10s helped Daley 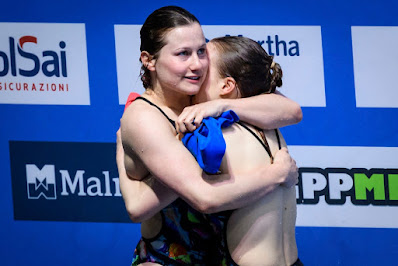 Britain’s wonder diver Tom Daley received 10 perfect marks of 10.0 in the platform final but not even those were enough against Russia’s Aleksandr Bondar who was out of this world during the evening as he showed an almost flawless performance to win the men’s 10m title. Earlier the diving contest saw the tiniest winning margin ever recorded at European Championships when Lena Hentschel and Tina Punzel of Germany edged out Italy’s Elena Bertocchi and Chiara Pellacani by 0.09 points in the women’s 3m synchro. In the lake French distance king Axel Reymond reconquered his 25km title among the men after 2014 and 2016, while Germany’s Lea Boy claimed a big win in the women’s race on the closing day at the open water swimming competitions.

Axel Reymond is a specialist at the 25km races, he won back-to-back European golds in 2014 and 2016 and clinched the world titles in 2017 and 2019, only to miss the podium in 2018. In Glasgow he came 4th, perhaps the most disappointing placement in this event, leaving the course empty-handed after swimming 25,000m. It was a painful experience for the French distance king and he was determined to re-conquer his title and also admitted that he wanted to prevent the Italian sweep after Gregorio Paltrinieri doubled down the 5-10km and was part of the winning team too.

Still, as it was usual this week at Lake Lupa, Italy had a serious title-contender over this distance too. It was veteran 32 year-old Matteo Furlan who kept up with the Frenchman but he could never really stay close to him over the second half of the race. It wasn’t a huge gap but did not go under 4sec and at the end Reymond won by 5.3sec, kind of comfortably. In the meantime Russia’s Kirill Abrosimov resurfaced before the final 500m (he was second in the middle of the race for a while) and challenged Furlan heavily but the Italian withstood the pressure and touched in 1.1sec ahead of him.

In the women’s race Lea Boy, just like Reymond, always swam in the leading pack, was ranked 1-3rd at each checking point. For a while she was in front with the others (the company changed from time to time), then she switched gears at 20km and never looked back. Well, she did it sometimes but could not see anyone following her since by the last lap she built a full minute advantage and kept it till the end.

The battle for the minor spoils turned into a three-horse race with France’s Lara Grangeon, Italy’s Barbara Pozzobon and Hungary’s Kata Somenek Onon. The two more experienced swimmers could rush ahead in the final lap, by two body-lengths, and decided the remaining two spots on the podium between themselves. Grangeon out-touched her rival by 0.3sec but Pozzobon’s bronze – a first-ever podium for her at majors – also meant that Italy could claim a medal in each event at the championships. Not surprisingly, they won the Team Trophy by a huge margin ahead of the French and the Hungarians.

While a couple of tenths decided on the medals sometimes in the lake, the diving pool saw even tighter finishes on the closing day in the women’s 3m synchro final. As if Elena Bertocchi and Chiara Pellacani had copy-pasted Lena Hentschel and Tina Punzel’s dives in performing (their programme was not identical). Their scores were similar during the entire session, though the Italians had a weaker second jump (44.40, each mark under 8.0) but they came up with the highest scoring dive of the final in the fourth for 74.40 points and took over the lead by 1.20. The quality of the last attempts was not superb but the Germans’ had a higher DD (3.1 vs 3.0) and even though the marks were almost the same, that gave them the winning edge by 0.09 points. It was a huge relief for Punzel who had five silver medals and a bronze in this event since 2014 – now she claimed gold at last. The battle for the bronze was just as tight – it came down to 0.3 points, which favoured the Russians Uliana Kliueva and Vitaliia Koroleva over GB’s Grace Reid and Katherine Torrence. And as usual, the best was saved for the last – the men’s 10m final proved to be the crowning event once more. Title-holder Oleksi Sereda kicked off the party receiving three 10s to his opening dive but the two Russians Viktor Minibaev and Aleksandr Bondar also began the evening in style, not to mention world champion Tom Daley who also received three perfect marks in the opening round.

The second then divided the field, Sereda bowed out after a complete miss and Daley’s attempt was also mediocre while the Russians held on, both earning a couple of 10s. Bondar remained phenomenal, his consistency was simply amazing, after he got 10s for his first two dives, he deserved that again for this fifth one and all but two marks out of the 54 was 8.0 – all the others were 8.5 and higher. His 564.35 points in total is a fantastic result, though the Arena’s record still belongs to Daley who had won at the 2017 Worlds with 590.

Daley bounced back with two magnificent attempts in the fourth and fifth, got seven more 10s (3 and 4 – had 10 altogether out of the 20 perfect marks the judges threw out this evening), his 109.15 pointer in the penultimate round was a class of its own. That decreased the gap to 16.45 points between him and Bondar but the Russian didn’t crack under pressure. Instead he offered another nearly perfect dive, his fifth over 90 points (and the sixth was 89.25) while Daley couldn’t maintain his level from the previous rounds but at least clinched the silver by 3.35 points ahead of Minibaev. The Brit produced three of the four highest scoring dives in the final but lacked the balance what Bondar showed throughout the evening.

It was a fitting end to the diving competition – and these two more medals secured that Russia won the Team Trophy, Germany was the runner-up, ahead of Great Britain.