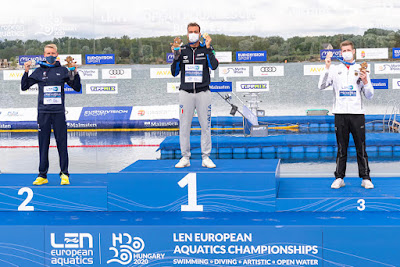 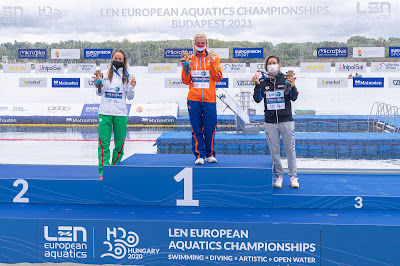 The heroes of Day 3 were at their best once more. Sharon van Rouwendaal and Gregorio Paltrinieri have become the undisputed rulers of the lake as both completed the 5-10km double today in open water swimming. Rouwendaal won in a thrilling battle, by 0.3sec, while Paltrinieri came first with an unusually large gap of 11 seconds in the men’s race. Russia and Ukraine earned a title apiece in artistic swimming, German diving legend Patrick Hausding continued his golden run with title No. 17 (for the first time in 3m synchro), and Russia’s 16 years old rookie Anna Konanykhina claimed a shocking win in the women’s 10m, after finishing 11th in the prelims.

At one stage Sharon van Rouwendaal was leading by eight seconds in the second half of the women’s 10km and in the past it was a clear sign that the race was over: the Dutch Olympic champion never let it go once rushing so far ahead. However, this time it was not the usual dominance, Van Rouwendaal admitted after the event that she was testing herself as well as the rivals and switched gears much more often than usual.

“I played too much perhaps” she said, and this burnt too much energy and as the finish commenced, the chasers got closer and closer to her – over the last 500m Hungary’s Anna Olasz was shoulder by shoulder with the title-holder. Olasz was a surprise challenger as during her 10 years in open water she could never claim a medal at majors in 10km, she had back-to-back silvers from 2014-15 (Berlin, Kazan) in 25km races. But this morning she kept her position in the leading pack and she became a real threat on Van Rouwendaal in the finish. The super-tired Dutch could still find some speed to touch in 0.3sec ahead of Olasz but she had barely left any energy to parade for the photographers on the pontoon – instead she received some instant crampeasing foot massage from Rachele Bruni who managed to grab the bronze by out-touching Spain’s Paula Ruiz Bravo by 0.4sec. The eldest in the field, aged 30, Bruni can now leave Hungary with great feelings, her brilliant senior career kicked of some 120km away in Lake Balaton at the 2006 Europeans, she won her first European title in 2008 and now, 13 years apart, she still posed with a medal in her hand – truly outstanding.

Next came the men’s race, an almost two-hour heroic battle among the world’s best competitors. It was a fair but constant fight for the top positions, in the middle of the race German world champion Florian Wellbrock and titleholder Kristof Rasovszky of Hungary tried to escape but they didn’t hold their lead too long so the pack was together for most of the time. Italy’s Gregorio Paltrinieri, winner of the 5km, threw himself into the hunt for the leader’s spot after 6000 metres, then disappeared for a while only to speed up for the last 1000m.

That was a missile-like launch and soon he gained three body-lengths on his rivals, sailed away before the last turn and won by an unusually large 11- second gap. Wellbrock could keep his position to be in the hunt for the minor spoils but Rasovszky couldn’t find a path to go forward. Instead, Frenchman Marc Antoine Olivier pulled ahead too and Olympic champion Ferry Weerman also joined the party with his monstrous strokes. However, the Dutchman kicked off his final assault a bit late and could not catch Wellbrock and Olivier who finished in the medal positions, with only 0.3sec separating them. Weertman touched in a second later, Rasovszky was fifth further two seconds adrift.

In the Duna Arena Russia’s wonder artistic swimming duet of the two Svetlanas, Romashina and Kolesnichenko added one more gold to their tally in the technical final (postponed from Monday), collecting a couple of 9.7s and 9.8s. Romashina’s treasury now contains 12 European titles while Kolesnichenko’s account stands at 10, add that they earned those from as many entries. Behind them, two of the Alexandri triplets, Anna Maria and Eirini recalled the good old ‘80s when Austria was among the leading nations in the sport – now they managed to earn a bronze, 34 years after the country’s last medal in this discipline.

In the afternoon it was time for another Ukrainian win, in the free combination (the Russians skipped this event). It was the usual show from them, with plenty of brilliant lifts and jumps for a handful of 9.5s and 9.6s. Greece earned the silver, the bronze went to Belorussia.

The men’s 3m synchro diving final turned into another triumphant march of Patrick Hausding who is flying high again. Already a legend with a medalling streak since 2008, Hausding won the 3m in several editions, first time in 2010, landed wins in the 10m synchro (9 in a row, an incredible record), was champion in the 1m (again here yesterday) but this was the first time he could clinch gold in the 3m synchro. Partnering with Lars Rudiger, they improved by each championships, after a bronze and a silver now they came first.

Again, it was their balance, which brought them this title. Their dives in rounds 3-5 were pretty good, two of them in the range of 85 points and that left room for even for an error in the last round, they still won by 11 points. The Russians, Evgenii Kuznetsov and Nikita Sleikher were also good but only one of their dives scored more than 80 points (barely), while Ukraine’s Oleksandr Gorshkovozov and Oleg Kolodiy clinched the bronze – they offered the best single dive in the fifth round, the only 90-pointers in the evening. Britain’s Daniel Goodfellow and Jack Laugher were second at halfway but a completely missed dive ruined their campaign.

The closing event saw the first 1-2 finish for a country. Russia’s Anna Konanykhina and Iulia Timoshinina claimed gold and silver respectively in the women’s 10m. The 16 years old rookie, Konanykhina came up with a really difficult programme and despite two relatively erroneous dives, the high DDs put her on top since she did the other three brilliantly, earning a series of 8.5s and 9.0s (the last attempt for 86.40 was the highest scoring dive in the final). It was an amazing turnaround after the prelims where she finished 11th . Timoshinina was leading by 20 points after three rounds but her last two attempts were faulty ones – still, she could hold on for the silver as the others had problems too. After a weaker opening dive, the other teenage rookie of the final, Britain’s Andrea Spendolini could keep her performance on a fine level to earn the bronze, ahead of much experienced competitors, like Ukraine’s Sofia Lyskun who came first in the prelims and Celine van Duijn from the Netherlands who had won the last two editions.