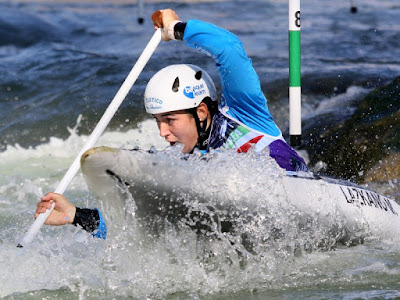 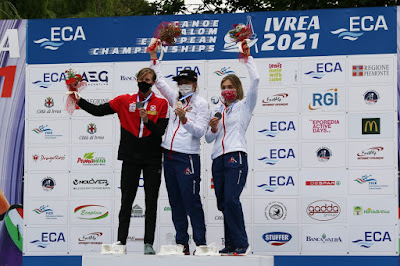 The new European Champion in women's canoe Miren Lazkano capsized before the third gate, but that did not throw her out of the game as she continued with strong pace to win her first individual medal at senior European Championships, and her first gold medal. So far, she won a silver and bronze medal in team events. Paddler from San Sebastian was 0.36 seconds faster than Czech Tereza Fišerova, while German Elena Apel took the bronze medal.

Miren Lazkano cried after she realised what she has achieved, "I was not expecting this at all. I rolled over in third gate, but then I thought it's now or never. I found strength and went for it. I am really happy and relieved. I have to thank everyone who helped me."

On the very technical and demanding course French canoeist Denis Gargaud Chanut showed the best final run to celebrate European Champion title, the only title missing in his collection until now. He is the 2016 Olympic Champion and 2011 World Champion. At first when he crossed the finish line a 50 seconds penalty was by his name, and he waved in disapproval. Soon after the penalty was removed and he remained in the top position until the end of the race.

"Finally I won all three big titles in our sport, so I am very satisfied with that. But that doesn't mean I will lose my energy to win again, so I am looking forward to the next races," said Denis Gargaud Chanut.

This Championships was also European Olympic qualifier and it was Slovakia who won a quota for Tokyo Olympics in women's canoe thanks to Monika Škachova. Even more intense was the fight for men's C1 quota between Italy and Germany. Two Italian and two German canoeists qualified for the final, with Roberto Colazingari setting the best time in the semifinal, so he started the last in the final. Sideris Tasiadis was at that moment in front of Italian Raffaello Ivaldi, so it was either Tasiadis or Colazingari. The latter did not manage to handle the pressure on home course and was ninth at the end.