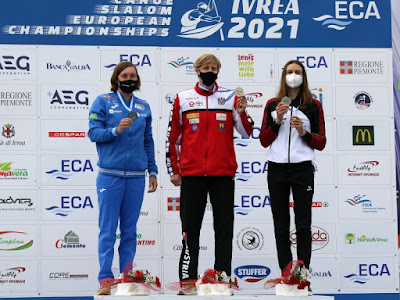 Austrian Corinna Kuhnle and Czech Vit Prindiš are the winners of women's and men's kayak final at the 2021 ECA Canoe Slalom European Championships in Ivrea, Italy.

Technically challenging course of the third competition day in Ivrea caused problems for many athletes and several favourites were left outside the final, but the podium positions were occupied by experienced and technically skilled athletes.

33-year-old Austrian kayaker Corinna Kuhnle set the best time of women's kayak final. This was her second European Champion title, after she was already the best in 2017 in Ljubljana – Tacen. She also has two individual silver medals from European Championships.

"I was really emotional after my run. This medal, this victory feels really special for me. I am just really grateful for all the people that support me, the people at home sending me their energy. This is just amazing to be supported like this," said Kuhnle.

Austrian was half a second faster than reigning World Champion Eva Terčelj from Slovenia, and Ricarda Funk, 2014 and 2018 European Champion, from Germany was third (she was almost four seconds behind).

Familiar names were also on the podium of men's kayak event. Vit Prindiš, like Kuhnle, won his second individual European Champion title. Czech kayaker was celebrating back in 2019 in Pau. Prindiš finished the final run 0.75 seconds ahead of Italian Giovanni De Gennaro, and 1.02 seconds ahead of Slovenian Peter Kauzer. While this is the first individual championships medal in senior category for De Gennaro, Kauzer won his sixth individual European Championships medal, first bronze.

"It's special. After last year when I really messed up the Olympic Qualification and closely missed the medal at Europeans in my hometown, I was quite disappointed. But I told myself just go for another season, do 100% trainings and it paid off. I am European Champion again," said Prindiš.

This European Championships also serves as European Olympic Qualifier for Tokyo Olympic Games. Only one quota per event is still available here and today it was a Swiss and Polish day to celebrate. Naemi Braendle won a quota in women's kayak event for Switzerland, while Krzysztof Majerczak won a quota for Poland in men's kayak.

In the afternoon part of the programme the time trials of the extreme canoe slalom European Championships were held. Corinna Kuhnle continued great performances by setting the fastest time in women's kayak, finishing ahead of Veronika Vojtova (CZE) and Hannah Craig (IRL), while Gelindo Chiarello (SUI) won in men's kayak, ahead of Boris Neveu (FRA) and Vit Prindiš (CZE).

On Sunday, the European Championships will conclude with women's and men's canoe semifinals and finals, and the final phase of Extreme Canoe Slalom competition.

* NOTE: AUT, CZE, ITA, SLO, SVK will be geoblocked online due to the TV rights restrictions