White House Admits That Intel On Russian ‘Bounties’ On U.S. Troops In Afghanistan Is ‘Shaky’

zekal3_3 2021-04-17 Videos, World Comments Off on White House Admits That Intel On Russian ‘Bounties’ On U.S. Troops In Afghanistan Is ‘Shaky’ 13 Views 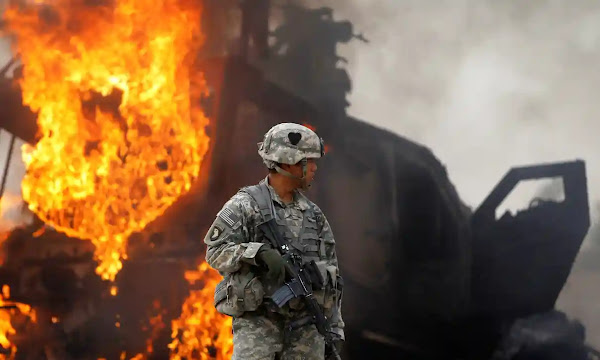 A US army captain stands near a burning armored vehicle destroyed by an improvised explosive device (IED) in the Arghandab Valley north of Kandahar, Afghanistan, in 2010. Photograph: Bob Strong/Reuters

The White House has acknowledged there was little evidence that Russia had offered Taliban militants bounties to kill US soldiers in Afghanistan.

A spokeswoman for President Joe Biden said the claim had "low to moderate confidence" from US spy chiefs. Russia has denied paying the bounties.

In last year's US election, Mr Biden heavily criticised Donald Trump for not confronting Russia over the claim. It comes amid new sanctions on Russia and US plans to leave Afghanistan.

WNU Editor: When this story first broke out I mentioned on this blog that it was bogus. Cannot say that I am surprised that months later the Biden White House is now acknowledging it.

More News On The White House Admitting That Intel On Russian ‘Bounties’ On U.S. Troops In Afghanistan Is Not Conclusive

Previous Tonight’s Movie Is ‘The Highest Honor; (1982)
Next Iran Says 60 Percent Enrichment ‘Under Way’ At Its Natanz Nuclear Site