zekal3_3 3 weeks ago Videos, World Comments Off on China’s New Aircraft Carrier Is Similar In Size To The U.S. Navy’s Super Carriers 18 Views 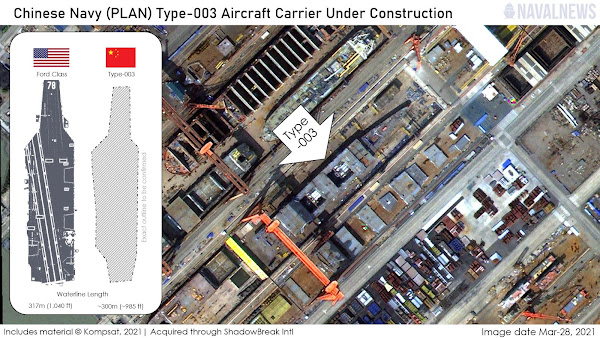 This commercial satellite image shows the massive hull of the Type-003 aircraft carrier. Based on the dimensions of the hull near the waterline, the overall carrier appears nearly as large as the US Navy's Ford Class ships.

The Chinese Navy is radically modernizing its capabilities. Chief among these are a fleet of aircraft carriers. A new satellite image clearly shows the Type-003 aircraft carrier taking shape in Shanghai, and it is the largest so far.

A new aircraft carrier being built in Shanghai is significantly larger than the current two in service with the Chinese Navy (PLAN – People’s liberation Army Navy). Combined with the expected CATOBAR configuration, where jets are launched by a catapult and recovered using arrestor gear, it should also be able to carry heavier planes. This should further increase the potency, survivability and PLAN’s reach.

The Type-003 is, in overall terms, similar in size the the U.S. Navy’s super carriers.

WNU Editor: From nothing to building a super carrier within a decade. China still has a long way to go before they can match the U.S., but they are making incredible progress.