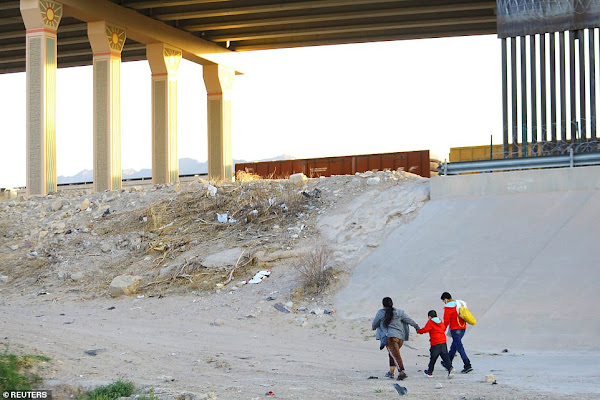 The gaps, like this one in El Paso, Texas, allow migrants to cross into the U.S. by foot and exacerbate the ongoing crisis
Daily Mail: Biden now wants to RESTART construction on Trump's border wall to 'plug the gaps' – with kids' camps way over capacity and a new surge of migrants coming from Guatemala
* Joe Biden is considering restarting construction on Donald Trump's southern border wall, DHS Secretary Alejandro Mayorkas told border enforcement Friday * Resumed construction would help fill 'gaps in the wall,' Mayorkas said * The administration is facing a massive influx of migrants arriving at the border * NASA have asked their employees if they are willing to volunteer to help at the overcrowded facilities * The move to resume construction would come as Biden made a big spectacle on Day One by issuing an order freezing Defense funding for the border wall * He later officially ended the national emergency order at the border
Joe Biden is considering restarting construction on Donald Trump's southern border wall as his administration continues to grapple with a growing immigration crisis including record numbers of illegal crossers.
Homeland Security Secretary Alejandro Mayorkas told employees, according to the Washington Times, that construction might resume to plug 'gaps' in the current barrier between the U.S. and Mexico.
Read more ….
Update #1: Mayorkas now considering filling ‘gaps’ in US-Mexico border wall: report (NYPost) Update #2: Construction of Trump’s border wall may continue under Biden, administration admits (The Independent)
WNU Editor: This news first broke out during Easter weekend when no one was paying any attention. But it is still being ignored by many in the main stream media.Original Article