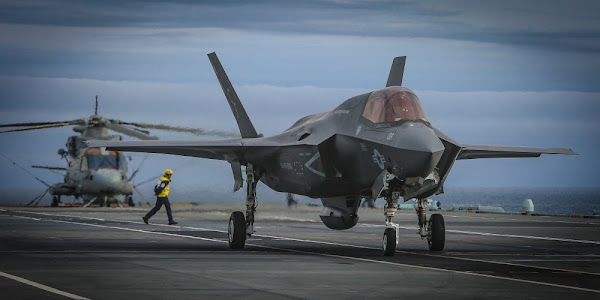 F-35B Joint Strike Fighter on the deck of a carrier US Marine Corps
Business Insider: A Marine Corps F-35 was damaged by a round fired from the fighter's own cannon that exploded
* A Marine Corps F-35B was damaged by a round fired from its own gun earlier this month. * The 25 mm round exploded after it left the F-35Bs externally-mounted 25 mm GAU-22/A Gatling gun. * The incident was a severe mishap, but the aircraft landed safely and no one was injured.
A US Marine Corps F-35B Lighting II Joint Strike Fighter was damaged earlier this month after a round fired from its own cannon exploded, Military.com first reported.
On March 12, the fifth-generation fighter was conducting a nighttime close air support mission on a range at Marine Corps Air Station Yuma in Arizona. During a gunnery exercise, a 25mm Semi-Armor Piercing High Explosive Incendiary-Tracer (SAPHEI-T) round fired from its cannon exploded, causing fragmentation damage to the fuselage.
The incident was classified as a "Class A' mishap, according to the Naval Safety Center. A Class A mishap, the most severe of the four aircraft mishap classifications, means at least $2.5 million in damages.
Despite the damage to the fighter when the round exploded, the aircraft landed safely, according to the Naval Safety Center. Marine Corps spokesman Capt. Andrew Wood said in a statement "the mishap did not result in any injury to personnel."
Read more ….
WNU Editor: This happened when the F-35 was flying. This could have ended very badly.Original Article

Previous U.S. Warns Germany That It Will Face Sanctions If They Continue To Build The Nord Stream II Pipeline With Russia
Next What Is The Future Of The F-35 And The Air Force Fighter Fleet?