zekal3_3 2021-03-21 Videos, World Comments Off on Russia Has Deployed All Six Of Its Black Sea Fleet Submarines As NATO Drills Begin In The Region 25 Views 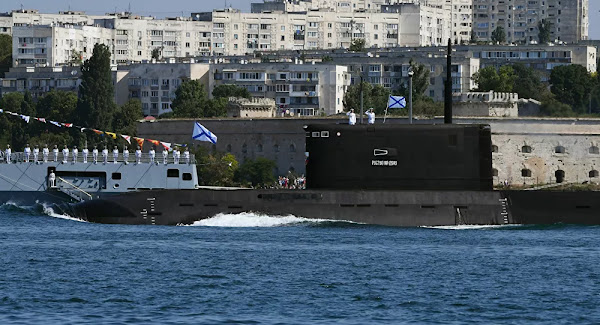 © Sputnik / Илья Питалев
Moscow Times: Russia Deploys All Black Sea Submarines as NATO Kicks Off Drills
Russia has deployed all six of its Black Sea Fleet submarines as NATO drills kicked off in the area, the state-run RIA Novosti news agency reported Friday.
“All Black Sea Fleet submarines are performing their tasks outside their bases,” said Vice-Admiral Igor Osipov, the fleet's commander-in-chief.
“None of the submarines are at their base,” RIA Novosti quoted Osipov as saying.
The commander of the Black Sea Fleet’s submarine flotilla, Captain 1st Rank Anatoly Varochkin, called the deployment “unprecedented.” “This doesn’t happen with either Russia’s other fleets or those of foreign states,” Varochkin was quoted as saying.
Read more ….
Update: Russian Attack Sub Reportedly Disappears From NATO Radars in the Mediterranean (Sputnik)
WNU Editor: It looks like one (or more) of these subs are going to the Mediterranean …. Black Sea Fleet sub to join Russian Navy’s Mediterranean Squadron (TASS).Original Article