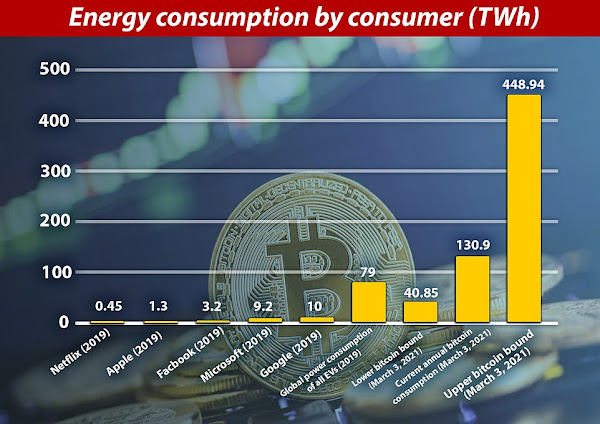 Pictured: A graph showing the amount of energy in terawatt hours (TWh) consumed by tech giants, electric vehicles and Bitcoin mining (lower, central and upper bounds). The bar second from right shows the current annual bitcoin consumption, that on March 3 was at a rate of 130.9 terawatt hours (TWh), roughly the same as New Zealand and Argentina
Daily Mail: How Bitcoin is eating the Earth: Computers creating 'worthless' cryptocurrency drive global warming as they use vastly more electricity than all the internet giants combined
* Bill Gates said earlier this week: 'Bitcoin uses more electricity per transaction than any other method' * His comments came after Bitcoin's estimated energy consumption reached its highest ever rate of 130 TWh * The cryptocurrency is 'mined' by high-powered computers that continuously solve computational puzzles * Studies show the electricity generated to mine and process the cryptocurrency is equal to the amount emitted by whole countries, including New Zealand and Argentina, and more than all tech giants combined * The currency surpassed the $60,000 mark for the first time, with its price rising with its energy consumption
Powerful computers 'mining' for the cryptocurrency Bitcoin are driving global warming as data shows they use vastly more electricity than all the internet tech giants combined.
Bitcoin passed the $60,000 mark for the first time on Saturday, but its rocketing value again raises questions over the vast energy resources required to run machines that mine for the cryptocurrency, that some – including billionaire Warren Buffet – even consider to be worthless.
On March 2, Bitcoin's estimated energy consumption reached its highest ever rate, hitting a staggering 130.90 terawatt hours (TWh) annualized. The following week on March 9, billionaire Microsoft co-founder Bill Gates highlighted the negative impact mining Bitcoin has on the environment.
Read more ….
WNU Editor: These server farms are massive (see picture below). 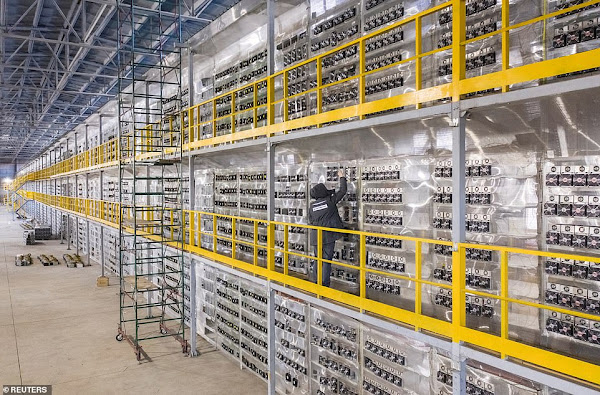 Pictured: The data centre of BitRiver company providing services for cryptocurrency mining in the city of Bratsk in Irkutsk Region, Russia March 2, 2021. The cryptocurrency is 'mined' by high-powered computers that solve computational maths puzzles, the complexity of which require huge amounts of energyOriginal Article

Previous Bitcoin Surpasses $60,000 In A New Record High
Next Five EU Leaders Want A Summit To Discuss ‘Huge Disparities’ In Vaccine Allocation Across The Bloc