Is The Biden Administration Stumbling Into War? 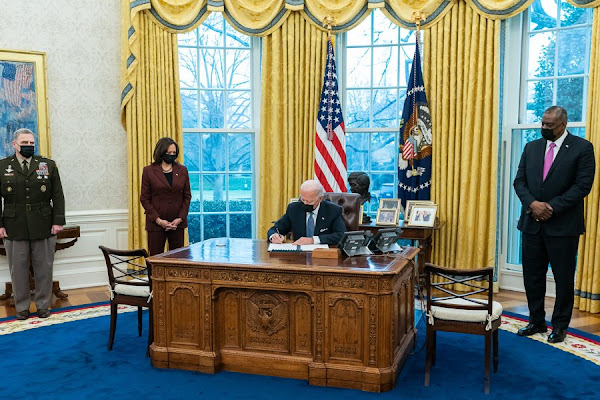 President Joe Biden, joined by Vice President Kamala Harris, Secretary of Defense Lloyd J. Austin III (right) and Chairman of the Joint Chiefs of Staff Army Gen. Mark A. Milley (left), sign an executive order rescinding a ban on transgender individuals serving in the military on Jan. 25, 2021, in the Oval Office of the White House. White House Photo by Adam Schultz.
Victor Davis Hanson, American Greatness: Is the Biden Administration Stumbling Into War?
Nothing is more dangerous than stronger powers, even inadvertently, sending signals that are interpreted as weakness by weaker powers.
What causes wars?
Innately aggressive cultures and governments, megalomania, the desire for power, resources, and empire prompt nations to bully or attack others. Less rational Thucydidean motives such as fear and honor and perceptions of self-interest are not to be discounted either.
But what allows these preemptive or aggressive agendas to reify, to take shape, and to leave tens of thousands dead?
The less culpable target (and wars are rarely a matter of 50/50 culpability) also has a say in what causes wars. The invaded and assaulted sometimes overlooked or contextualized serial and mounting aggression. They displayed real military weakness or simple political ineptness that eroded deterrence. They failed to make defensive alliances with stronger nations or slashed defense investments that made the use of deterrent force impossible.
Read more ….
WNU Editor: President Joe Biden says that he will use force as a “tool of last resort” …. Biden Outlines Views on Using Military Power in 1st Pentagon Visit as President (Air Force Magazine). But as I enjoy saying. You may not want war, but war wants you.
The flashpoint that worries me the most is Afghanistan. If the decision is made to keep US soldiers in Afghanistan and break the agreement with the Taliban, that war is going to explode to levels not seen since the fall of the Taliban in 2021.Original Article