Everything you need to know about Olympic Diving at Tokyo 2020 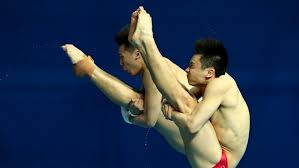 Don't miss the excitement of the perfect plungeon. Find out all about who the key athletes to watch will be in 2021, when and where will Olympic Divers will be performing, and more.

Diving has featured at the Olympic Games for over a century, and there will be eight medals on offer in the sport at Tokyo 2020.

There will be four medals available each for men and women, including two 3m springboard and two 10m platform events.

People's Republic of China is the dominant force at diving, and they won seven out of eight gold medals at Rio 2016.

The Asian powerhouse won nine out of 12 events at the 2019 world championships, meaning they will once again be the nation to beat at Tokyo.

On the men’s side, double world champion YANG Jian has been the most consistent diver in this Olympic cycle. But he will have one eye on Britain’s Tom Daley, who beat him on one leg of the last World Series and will be hoping to add another Olympic medal to his tally.

Things could be more competitive in the 3m springboard however with Britain’s Jack Laugher set to provide another stern examination of his Chinese rivals, four-time world champion XIE Siyi and Cao.

Synchro Olympic champion Laugher will have a new partner in Dan Goodfellow for Tokyo, but their silver medal at the 2019 world champs suggests they will be competitive. However, they were beaten by Xie and Cao in Gwangju, who will be quietly confident of another victory.

Laugher will also be a threat in the individual event, having won silver in Rio and was leading the 2019 world champions until an uncharacteristic error on the final jump meant he finished in third.

Also keep an eye out for Canadian Olympic bronze medallist Jenny Abel who took world silver in 2019 in the individual event, and synchro alongside Melissa Citrini-Beaulieu.

On the 10m platform, all eyes will be on Chinese teenager CHEN Yuxi, who won the individual world title in 2019 as a 13-year old. Her main rivals will be compatriots in Olympic champion REN Qian and fellow world champs Lu Wei and ZHANG Jiagi.

Diving competition runs from 25 July-7 August 2021, being the men's 10 m platform event the last one of the competition.

Check here the complete schedule and all times are in Japan Standard Time (JST).

Unlike the world championships, there are no mixed events.

There will be 136 athletes taking part in the competition, with athletes from Japan, People's Republic of China, Mexico, USA, Great Britain, Canada and Malaysia having qualified so far.

Qualification has not been completed yet, with the final places to be won at the 2021 FINA Diving World Cup.

The state-of-the-art facility was opened by Rikako Ikee, and is located in the Tatsumi-no-Mori Seaside Park. With a 15,000-fan capacity will also host swimming and artistic swimming.

Following the 2020 Olympic Games in 2021, the venue will host domestic and international competitions.

By the Olympic Channel

Previous President Biden Says ‘America Is Back’ In G7 And Munich Security Conference— Vows Coordination With Allies On Security Threats like ISIS And Afghanistan, As Well As Confronting Countries Like China And Russia
Next Will President Biden Abandon Afghanistan?