zekal3_3 2 weeks ago Sports, World Comments Off on Lessons from The Good Life and the 2021 US Women’s Open 1 Views

In her philosophy class lass "The Good Life," Dr. Meghan Sullivan contends there are some things in life that we just can’t outsource to other people. In other words, only you should offer an apology to someone you have hurt, you must be the one to go on the awkward first date with someone you are interested in dating. and, the only person to speak to a therapist about their own problems….is you. Sullivan offers these examples because she also believes that determining what makes a life good—the essential question of the course— is something you have to do for yourself. I asked my students what they thought. When I found little to no disagreement, I then asked "What else ought you do for yourself?" Someone replied "write a thank you note." "Interesting," I said. "And is a thank you note essential for living a good life?" My student replied, "maybe not the note itself, but expressing gratitude in an intentional or formal way is." I agree. 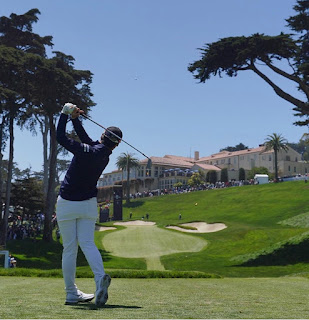 I recall this snapshot of my Moral Issues class because I find myself in need of expressing gratitude. And, I don't know to whom I should address my note—but I am thankful to have been a part of the 76th United States Women's Open that took place from June 3-6, 2021 on the Lake Course at the Olympic Club. It was the fifth time the club has hosted a US Open Championship and the first time it has welcomed the women's tourney. I will carry memories from this entire week with me for a lifetime.

When asked to work as the co-chair for junior volunteers in September 2019, the plan was to target young people, especially female golfers—to work "inside the ropes" next to the best women in the world. Like so much of life since March 2020, the USGA worked overtime to pivot and find a way to keep young people involved. I'm glad they did–not for my sake but for those young members who were able to contribute to the success of the event! 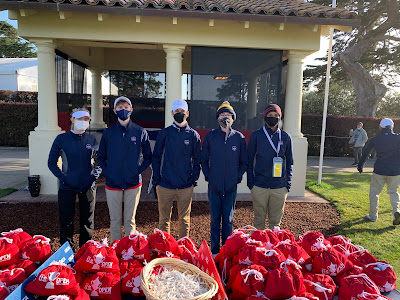 Thank you to my co-chair Marissa and to the crew of young Olympians who showed up Monday through Sunday. They sorted through thousands of range balls, separating between Titlelist Pro VI, Titlelist Pro VX and Callaway and bagged them into a highly coveted* US Open 2021 red bags. They placed the sign placards behind each player on the range so the crowd would know who was warming up, shagged balls on the 18th green practice area and made it all work.

There were so many highlights from the week, but one in particular was having my team—Saint Francis girls' golf in attendance on Thursday, Day 1 of the Open. These young women really know the game as both players and as fans. They were in awe of seeing the players up close and personal. They analyzed their swings, their putting, their bags and their outfits 😉 At one point, the commentary between two of my players was so good, I suggested that they get into the announcer's booth. Should I warn Kay Cockerill or Morgan Pressell now? My team was slightly star struck, when they realized we were sitting next to several members of the Stanford women's golf team. They thanked Cal Coach, Nancy McDaniel for her Confidence Drill and they were able to take photos with several players. Go Lancers!

My team wasn't the only enthusiastic bunch on the property. It was great to see so many fans of all ages—both men and women, teens and kids excited about the women's game. The tourney offered several great story lines with the return of past champions: the Pink Panther—Paula Creamer and new mom, Michelle Wie-West. One of the amateurs—Megha Ganne who has yet to complete her junior year of high school (and is already committed to Stanford) made her way into the final pairing. She is poised and gracious, spirited and spunky. I love that she beckoned the crowd to roar for more (after making a putt for bogey….awesome) and that she conceded that although she was a crowd favorite, her caddy–a long time member might be the bigger draw. Unfortunately, Lexi Thompson—who was once the youngest golfer to play in the USWO at the age of 12—lost the lead and finished in third. The Lake Course has long been known as the "graveyard of champions." Thompson proved it to be no misnomer. Though part of the story of the 2021 USWO, none of that should take away the accomplishment or the congratulations due to Yuka Saso of Manila, Philippines. Saso captured the championship in a sudden death play off and defeated Nasa Hataoka of Japan. 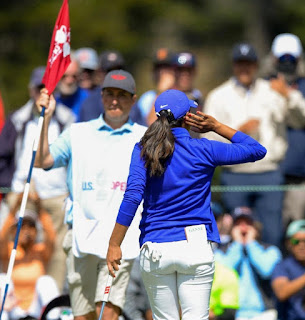 I kept thinking of the word "hospitality" all week long. To host an event takes incredible preparation, time, energy and sacrifice. Due to COVID, it was unclear whether or not fans would even be allowed in attendance and the volunteer pool was limited to just members. Fortunately, the tourney welcomed limited fans and it all worked because folks worked long shifts many of which required either setting and alarm clock and/or going to bed past one's bed time. We all bared the summer in San Francisco (brutal!) and walked away with fog burn, wind burn, new friends and a deepened appreciation for the club and the game of golf. 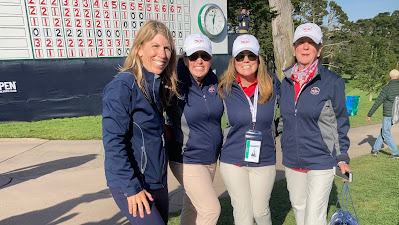 As I was talking to two of my players, I realized the man standing near us was none other than Mike Wahn, the longtime commissioner of the LPGA and soon to be CEO of the USGA. I smiled at him, introduced myself and said "I teach about you in my class." I told him about the power of the thank you note—how much I appreciated that he encouraged the LPGA players to write them to sponsors and in turn how this helped to grow the game. He was holding a folder and said "I have a few of them in here." "Caught in the act," I said. That is also something only you can do for yourself.

What makes a life good? The 2021 USWO reminds me of the answers: friends, service, hard work, inspiration, athletics—golf, teamwork and….gratitude.

Previous In Addition to the COVID Vaccine, a Different Shot in the Arm
Next Coaching Will Ruin Your Life: Why We Do It Anyway

We Are Not Forgotten: Remembering Mike

Golf has the ability to connect young and old, male and female, living and those …