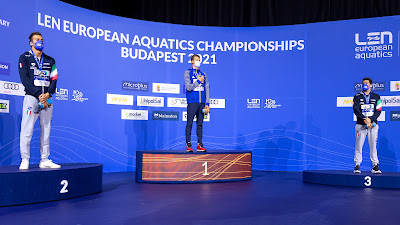 The Brits enjoyed another great day in the Duna Arena, claimed five medals, two of them gold: Adam Peaty won his 4th straight title in the 50m breast (already achieved that in the 100m) and with another medley relay gold he can make another four-gold edition, the fourth in a row. The other victory came in the mixed medley relay, so in this part Team GB is 3/3 here in Budapest and they lead 9-8 against Russia in the title-race. It could have been 10-7 but Evgeny Rylov chased down Luke Greenbank in the last 20m in the men’s 200m back. Ukraine’s Mykhaylo Romanchuk made the 800- 1500m double for the first time at the Europeans in his career. Among the women new champions were crowned: it took almost an eternity but Femke Heemskerk finally hit first in the 100m free to earn her very first individual European gold. In the 200m IM Katinka Hosszu could have become the first swimmers in history who wins 6 straight titles in the same event but this time the Hungarian had to settle for the bronze while Anastasia Gorbenko, just 17, delivered the first-ever European victory by a female to Israel. Youngsters made more splash, 16 years old Italian Benedetta Pilato clocked a new world record in the 50m breaststroke.

Though Adam Peaty is far from his devastating shape, he still makes the headlines with his swimming, besides his new look (short hair, moustache) and the great news that he has become a father. The British Lion made the 50-100m breaststroke double at the fourth straight Europeans, tying Hungarian Laszlo Cseh’s feat in the IM (from 2006-2012). Peaty was no match for the others once more and he can eye now a never-seen 4×4 title-rush as he had ‘pokers’ in each of the previous three editions with the mixed and men’s medley relays (the men’s relay is due tomorrow).

Another historical effort is in sight, thanks to Mykhaylo Romanchuk’s win in the 800m free. After coming first in the 1500m free with ease, the Ukrainian had a much closer contest with Gregorio Paltrinieri. The Italian swam in front for most of the time but Romanchuk had more reserves in the finish and he passed his rival over the last 100m. This title-defence set him up to become the first male ever to achieve the 400-800-1500m treble at the Europeans – he had clinched the 400m in Glasgow, tomorrow he can complete his mission.

As for historical milestones, Katinka Hosszu was only a step away to pass another as she could have been the first swimmer at the Europeans to win the same event for the 6th time in a row. The 200m IM was the only event the Hungarian medley queen entered in Glasgow 2018 and she could still win it despite her problems back then in her private life. She also had an incredible PRESS undefeated streak in this event, beginning in late 2012 and she maintained that at both long-course and short-course majors and World Cups.

However, this time she had to settle for the bronze medal after winning five editions since 2010. The writing was already on the wall at the 150m turn as she was only fourth – she produced a big finish but Anastasia Gorbenko, 17 (almost half of Hosszu’s age) prevailed at the end, she won by 0.04sec ahead of Britain’s Abbie Wood and Hosszu touched in further 0.09sec adrift. Still, with a complete set of medals from this meet (gold in 400m IM, silver in 200m fly), Hosszu retook the lead from Sweden’s Sarah Sjostrom in the alltime individual charts with 16 titles and 26 medals (16-7-3) in total.

So a different chapter was opened at the championships’ history book since Gorbenko is the first female Israeli swimmer to win a European title. While in medley the new generation made a breakthrough, in the women’s 100m free we saw a grand premiere from the other end of the age-scale. Netherlands’ Femke Heemskerk has always been around in the past decade or so, helped the Dutch relays to huge wins since 2008, she amassed 17 titles at Olympics, Worlds and Europeans, both short-course and long-course, but – only two of those came in individual events and none in the 50m pool.

Up until today, as Femke finally hit the wall first in the 100m free – perhaps no one left claiming an individual l/c European title so late as she managed to achieve that at the age of 33. But better lately than never – and she joined the circle of those here who didn’t withhold their tears for long minutes after conquering new heights.

Besides Romanchuk’s title-defence, Russia’s Evgeny Rylov also repeated his win from Glasgow as he overtook Luke Greenbank in the last lap to win the 200m back again. Roman Mityukov did some Swiss timing to out-touch his French rival Joyann Ndoye Brouard by 0.04sec at the wall to earn a first-ever medal for his country in this event. Former 4-time champion Radoslaw Kawecki of Poland finished 6th, first time off the podium since 2012.

The session ended in a business as usual mood as the Brits made 3/3 in the mixed relays, adding the 4x100m free this evening. It was tight but Freya Anderson delivered the winning touch again, this time 0.19sec ahead of the Netherlands and 0.57 of the Italians.

Quite interestingly, that was podium No. 21 for the Italians – in the total count they are even besting the Brits (who achieved 20 so far), but in the classic medal chart they sits in the 5th place as ‘only’ Simona Quadarella could win two races, all others claimed the minor spoils, 8 silver and 11 bronze (0-1- 3 today).

They can move up on the final day, though, as they have a couple of great chances – one which looks a sure bet is Benedetta Pilato who set a new world record in the semis of the 50m breast. The 16 year-old had an amazing swim and she brought down Lilly King’s mark by 0.1sec to clock 29.30. It was quite fitting to do it here as the American set the previous WR in this pool at the 2017 Worlds.