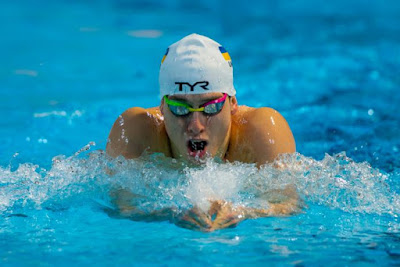 Ukraine was the dream team on the penultimate day of the Madeira 2020 European Para Swimming Open Championships winning nine golds to overtake Italy at the top of the medals table.

The country claimed nearly half of the 22 titles up for grabs in a series of stunning victories at the Penteada Olympic Swimming Pools Complex on Friday (May 21).

Maksym Krypak led the charge to win his fifth title of the competition in a blistering display of speed and strength in the 100m freestyle S10.

The 25-year-old pushed Italy’s Stefano Raimondi into second place for the fifth time this week in 51.16, which was just outside his European record. Russia’s Dmitrii Bartasinskii took the bronze.

There was another outstanding performance from his teammate Yehvhenii Bohodaiko who claimed his fifth European title in a row in the 100m breaststroke SB6 final. The world record holder hunted down Israel’s Mark Malyar, who went out strongly, to win his second gold.

“I am happy with the win and aware of the mistakes I made. I hope to break the world record in the near future,” he said after the race. “I am glad about my results in this competition because we haven’t competed on the highest level for a long time. Although, I can do much better.”

Competing alongside Bohodaiko in the race was his teammate Andrii Trusov, who came fourth. Earlier on day six the powerful 21-year-old pulled away from the rest of the field in the 50m freestyle S7 to win his third gold medal of the competition. Bohodaiko came in second.

Belarus legend Ihar Boki also showed off his incredible form by winning his fifth gold medal of the competition. In another brilliant display in the pool, the world record holder charged from the front in the 400m freestyle S13 to claim his 23rd Championship title. France’s Kylian Portal won the battle for second with Ukraine’s Kyrylo Garashchenko third.

“It is very pleasant to take part in this Championship, especially considering that this is a first big competition after a long break. I am very happy that I can show good results here in Madeira. I would like to thank the Organising Committee for putting on this event at such a difficult time,” said the 26-year-old.

“I am training constantly to improve my results. I am looking ahead, but of course I can’t deny the influence of my age. Young athletes are following me and perhaps they will win next time.”

The Championships are open to non-Europeans ahead of the Paralympic Games in Tokyo and Brazil’s Gabriel Bandeira has shown phenomenal form all week. On Friday he took the field by storm to win his fifth title in the 100m freestyle S14.

Israel’s Ami Omer Dadaon landed his second world record of the competition in the 200m freestyle S4. He broke away from Russia’s world record holder Roman Zhdanov in the last 50m to touch the wall first. The gold medal was his third of the week.

“I wasn’t in my best shape today, but I knew I have to give it my all. That is exactly what I did. It was very exhausting, but I did it at the end eventually.”

In the women’s 50m freestyle S7, Italy’s Giulia Terzi claimed her fourth gold when she hit the wall a fraction of a second ahead of Germany’s Denise Grahl and Ukraine’s Anna Hontar in 33.44.

“I am so happy because the 50m freestyle is not my favourite competition,” she said. “I have won four golds and one bronze medal. The training was hard, but the satisfaction is enormous.”

The Italian team picked up three golds during the finals with Francesco Bocciardo and Monica Boggioni each getting a gold medal in the respective men and women’s 200m freestyle S5.

Great Britain’s Jessica Applegate also turned in an outstanding performance in the 100m freestyle S14 final. She led from the front to win her third gold medal.

In the surprise result of day six, world record holder Simone Barlaam just missed out on the medals in the 100m backstroke S9 final. The Italian, who was in the lead for most of the race, was overtaken in the last few strokes by Russia’s Bogdan Mozgovoi, who came first, followed by France’s Ugo Didier and Belgium’s Yahor Shchalkanau.

Hungary also topped the podium with Bianka Pap, who claimed her third gold in the women’s 100m freestyle S10, and Evelin Szaraz who picked up the women’s 100m breaststroke SB6 title ahead of Ireland’s Nicole Turner.

In the women's 200m individual medley SM8, Russia’s Victoriia Ischiulova finished strongly in first, as did her teammate, Kateryna Tkachuk in the 100m backstroke S11.

The European Open Championships finishes on Saturday (22 May) with 20 finals. Complete results and schedule can be found on the Madeira 2020 website https://www.paralympic.org/madeira-2020/schedule-results/

All the action on day six seven will be live on World Para Swimming website http://www.worldparaswimming.org/

(with geo-block restrictions in Spain and the United Kingdom).

Behind the scenes and more from Madeira on Instagram https://www.instagram.com/paraswimming/