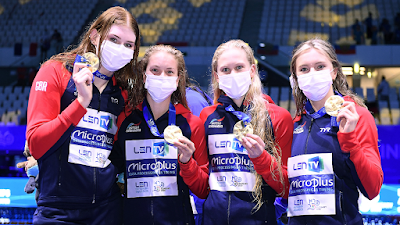 The day belonged to Team GB as they amassed three titles – all in the women’s events – and five medals altogether. Kathleen Dawson won the 100m back (in fact twice), Molly Renshaw did a clean job in the 200m breast, while the 4x200m free relay won by a mile. Italy’s Simona Quadarella was a cut above the rest in the 1500m free and won her second title here, like Russia’s Martin Malyutin, in the men’s 200m free. The hosts clinched gold in the 50m fly, thanks to the lucky touch of Szebasztian Szabo who won by 0.01sec.

Team GB enjoyed a brilliant evening in the Duna Arena by winning three out of the four women’s events. Kathleen Dawson indeed won the 100m back final twice, once early in the session as scheduled, then again late in the evening when the event was re-swum.

As it turned out, the voice-signal system, which aides the backstrokers at the start, malfunctioned at a couple of blocks and Sweden’s Louise Hansson – who was otherwise a late replacement of Israel’s Gorbenko – started off almost two seconds later and Kira Toussaint of the Netherlands also talked about confusion around the starting signal after the final. Sweden lodged an official protest and the LEN officials gave way to repeat the final, after the conclusion of the original programme.

Dawson was dominant again and won by a margin of 0.52sec once more, and she set a new Championship Record once more, 58.18 (she clocked 58.13 previously). The twist came in the runner-up position: while at first Netherlands’ Kira Toussaint finished second with 59.02, in the re-run Italy’s Margherita Panziera claimed silver (59.01), while the bronze remained in Russia’s Maria Kameneva’s hand who was slightly off her original pace (59.13 v 59.22). It was Toussaint who could not near her original effort (59.02 v 59.32), despite taking the fastest start in the second swim.

Molly Renshaw’s victory in the 200m breast was much more peaceful in all sense: she went in front over the second lap and never let it go after. After a silver in 2014 and a bronze in 2018, Renshaw finally made it: she gained 0.71 second on Switzerland’s Lisa Mamie who was in shock upon learning that she just took the silver medal. Her astonishment was quite understandable: the Swiss has never been close to the podium in women’s breaststroke events. Russia’s title-holder Yuliya Efimova – who earned her first title back in 2008 over this distance – out-touched compatriot Evgeniia Chikunova by 0.01sec for the bronze.

The Brit’s completed a golden hat-trick by landing another relay title, No. 4 here in Budapest, this time in the 4x200m free. It was a dominant performance, their winning margin was huge, 3.11sec, ahead of the hosts’ quartet who claimed silver a bit surprisingly from lane 7, while Italy got the bronze.

That was a fine way to end the day for the Italians – besides Panziera’s lucky silver – as it already started off well when Simone Quadarella retained her 1500m free title in the opening event of the session. She did the 400-800- 1500 treble in Glasgow 2018, here she stands 2/2 so far, with the 400m coming on the last day.

As for the men, Russia’s Martin Malyutin achieved the great double too, added the 200m title to his 400m gold while setting a new CR. The Russian was the only one under 1:45sec – he geared up lap by lap (his placement at the turns: 4th-3rd-2nd-1st). It was a fine win, 0.40sec ahead of the Brits, titleholder Duncan Scott and Thomas Dean.

The 50m fly, as a tradition, brought the closest contest imaginable. Hungary’s Szebasztian Szabo had the luckier touch at the end, 0.01sec ahead of worldrecord holder and 2016-18 champion Andriy Govorov of Ukraine, to win his first-ever gold at majors (he had a silver from the 2019 short-course Europeans). The bronze was also decided by the smallest margin possible, Russia’s Andrey Zhalkin edged out Konrad Czerniak of Poland by 0.01sec too.