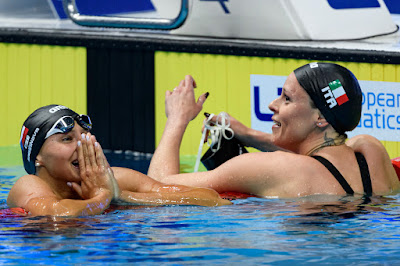 New faces smiled to the cameras while posing with the respective gold medals: Czech Barbara Seemanova earned a stunning win in the women’s 200m free, followed by Romania’s Robert-Andrei Glinta in the men’s 100m back and Spain’s Hugo Gonzalez in the 200m IM. There were a couple of title-defences too, Hungary’s Boglarka Kapas continued her winning streak in the women’s 200m fly, just like Russia’s Anton Chupkov in the men’s 200m breast. The Brits won another realy gold, the third here, this time in the mixed medley, with a new European record.

The Duna Arena turned into a site of long-seen scenarios – gold for the Czechs, a Spanish and a Romanian male swimmer. This latter one indeed was an act never-seen-before: after delivering a silver in the 50m back, RobertAndrei Glinta claimed his country’s first-ever European title among the men by winning the 100m back (and it was long ago when they had a gold at all: their federation’s current president Camelia Potec was the last victor back in 2004).

It was a real thriller as only 0.14sec separated the first six and only 0.09 the first four. Glinta won by 0.02sec ahead of Spain’s Hugo Gonzalez while Apostolos Christou from Greece shared the bronze with France’s Yohann Ndoye Brouard. Interestingly, this was the third straight bronze for the Greek – his first also came after a tie in 2016 (and this was the 4th shared medal here in Budapest).

Gonzalez was back for more in the 200m IM where he stunned the field with a brave swim and claimed his first-ever senior European title – a first for Spain among the men since Rafael Munoz’s triumph in 2010, also here in Budapest. The Spaniard bested title-holder Swiss Jeremy Desplanches who turned first at 150m but couldn’t beat back Gonzalez’s surge who came from behind (was 4th) to win the race. The bronze went to Italy’s Alberto Razzetti, ahead of Hungary’s legend Laszlo Cseh who finished fourth, this time beating compatriot and SF-winner Hubert Kos (17 years younger than the former king of this event).

A third upset came in the women’s 200m free where Barbara Seemanova could out-touch Federica Pellegrini for the title. The gap was 0.02sec, only 0.28 between the first and the fourth – still, it was amazing to see Queen Fede being beaten in her pet event where she won four straight gold between 2010 and 2016 (skipped Glasgow) and back-to-back world titles in 2017 and 2019. The Czechs had 3 titles in the history of the Europeans till today and their last came in 2012 when Petra Chocova triumphed in the 50m breast.

In two finals the old guard ruled the field: Boglarka Kapas carried on her winning streak in the 200m fly. The Hungarian switched to this event after she had got enough freestyle swimming over the longer distances but while in Glasgow 2018 and in Gwangju 2019 she kind of surprised even herself by claiming the titles, now with one more year devoted to practice she kept the race under firm control and delivered a flawless performance. Compatriot Katinka Hosszu returned to this event after 2012 (back then she had won, also in 2010) and finished runner-up, something of a tradition for the Magyars who claimed 5 silvers in the last 7 editions. Indeed the golds also have also belonged to them in the 200m fly for a while: in the last three majors (2018, 2021 Europeans, 2019 Worlds) Kapas won 3/3 like Kristof Milak among the men.

Anton Chupkov is in a similar though a bit longer winning rush: the Russian hit the wall first at the 2017 Worlds here in Budapest, since then he won in Glasgow, in Gwangju and here again. His last 50m was as devastating as ever and blew away the Nordic challengers, Finland’s Matti Mattson, leader at 150m, and Sweden’s SF-winner Erik Persson who came third as Arno Kamminga also staged a tremendous finish (he was even 0.03sec faster than Chupkov over the last lap).

In the relay ‘overall’ the Brits took a 3-2 lead over Russia – while Kolesnikov&Co. won the two men’s relay so far, the Brits took the women’s 4x100m free and now went 2/2 in the mixed by coming first in the medley and they also set a new European record with 3:38.82.

By the way, talking of records and Kolesnikov, the Russian came up with another blast as he clocked 52.09 in the opening backstroke leg in the relay. This is better than the current European record (52.11), though the rules do not recognise individual records while men and women swim together. It was also a message for the field of the 100m back: Glinta’s winning time was 52.88 – just Kolesnikov couldn’t make that final on Wednesday as he went for the 100m free title and was unable to recover for the semis.