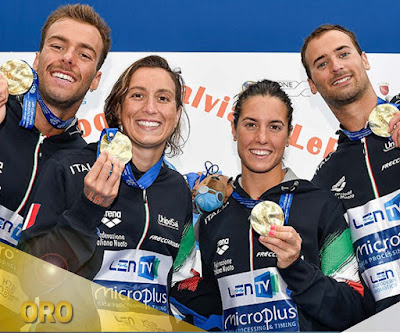 Italy’s superhero Gregorio Paltrinieri completed a hat-trick in open water as he was the one who made the difference in the team event to give Italy the victory and to claim his third title in the Lupa Lake. Though Britain’s diving star Tom Daley had an amazing collection of gold medals but today he added one which he had never won before: a title in the men’s platform synchro event. With Matthew Lee, they came first in an incredibly thrilling final, bagging 43 marks of 9.0-9.5 out of 54. The women’s 3m final wasn’t any less exciting, at the end Germany’s Tina Punzel had the last laugh.

Gregorio Paltrinieri made the difference in the team event at Lake Lupa: his blast in the third leg – 12:53min – gave a 14sec lead to Italy before the last 1250m lap and that was easy to defend by Domenico Acerenza. The field was together at the halfway mark, then it was quickly torn apart once Paltrinieri left the pack behind. Before the last lap, the French had a 7sec advantage ahead of Hungary and Germany when the anchors began the final quest.

Three world champions clashed for the two remaining spots on the podium and Marc Antoine Olivier, Florian Wellbrock and Kristof Rasovszky staged a thrilling battle. Though Rasovszky is famous for anything but being a sprinter, team spirit took over and with Wellbrock they managed to catch up 5km and 10km silver medallist Olivier and turned into the final sprint shoulder-byshoulder. They seemed to hit the finish panel at the very same time – 9 seconds behind Acerenza –, and the referee had to watch the recording a couple of times before he confirmed that Wellbrock was the fastest to touch in, 0.5sec ahead of Rasovszky, and a fingernail separated him and Olivier (0.2sec) for the bronze. Paltrinieri finished his open water campaign with 3/3 golds, and he will be back for more in the pool next week.

In the closing event in artistic swimming, Ukraine came closer to Russia in the gold medal race (6-4) as they won the Highlights Routine. While the event is yet to attract more entries, the Ukrainians got significantly high scores, which can be a huge boost for them for the summer. Belarus came second and host Hungary claimed its first-ever medal in artistic swimming, a bronze.

With eight podium finishes in as many starts, Ukraine claimed the Team Trophy (they did not enter in mixed duet) – Martina Fiedina was part of each so she is the most decorated swimmer of the championships so far with four gold and four silver medals.

In the previous two ‘big’ editions, the Brits enjoyed some outstanding success in diving, an 11-medal haul (3 titles) in London 2016 and 10 podium finishes (4 titles) in Glasgow 2018. Now they had to wait till the penultimate day of the competition to celebrate their first victory. Tom Daley and Matthew Lee won a majestic duel against Russia’s super due of Victor Minibaev and Aleksandar Bondar.

The two pairs left the others behind once the DD jumped to the heights of 3.2-3.6s. Indeed all four divers were tremendous during the entire competition – out of the 54 marks Daley and Lee received in the afternoon, 43 were 9.0 or 9.5. The Russians got less 9.0 and 9.5s (25) but their programme was slightly stronger in DDs, so at the end only 5.61 points separated them. The last three dives were all 92+ pointers for both, the difference came in the third round when, due to a minor mistake, Bondar and Minibaev got ‘only’ 79, while the Brits earned 86 – and thanks to the following superb deliveries the gap remained till the end.

Patrick Hausding was back to the podium after an ‘off-day’ in the 3m final, now he claimed his fourth medal here, a second bronze (also has two golds). Diving with Timo Barthel, the Germans did a fine job and their third place was never in danger. Indeed it was some consolation after they had missed the Olympic cut in Tokyo by a tiny margin.

Like in the British camp, there was a missing part for the Germans too: a medal in the women’s event. It came this evening finally and it was a gold straight away. Tina Punzel claimed it after a highly exciting final in the women’s 3m.

The first two rounds saw solid dives from the favourites, then in the third Punzel and Italy’s Chiara Pellacani both had an erroneous attempt while Russia’s Vitalia Koroleva came up with the best effort of the session with 75 points, which rocketed her to the first place. But her next one was a real miss (40 points) and that cost her even the podium since her rivals managed to rebound with two fine dives and even Emma Gullstrand passed her as she was balanced enough to catch the bronze, the first medal for Sweden here in Budapest.