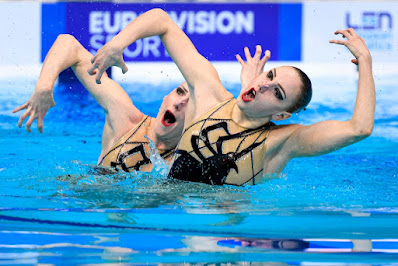 The Russian super duet of Svetlana Romashina and Svetlana Kolesnichenko offered pure magic and earned one perfect mark for their free routine. Another Russian gold came in the mixed duet while Ukraine won the team free, here Israel claimed a historic first-ever bronze medal. The diving pool also became Russian territory for this evening, they come first in the women’s 10m synchro and Evgenii Kuznetsov and Nikita Shleikher delivered another 1-2 finish for the team in the men’s 3m. Kuznetsov earned 525 points in the final, an amazing feat – and a stylish way to clinch Russia’s 100th diving title at European Championships.

While the Russians usually keep their brand new team free routine a top secret in Olympic years in order to amaze everyone at the Games (and not to give the chance for anyone to copy any element of it), their duet didn’t hide or hold back anything this morning. The two Svetlanas – 22 European titles among them before this event –, Romashina and Kolesnichenko got ‘into the zone’ for this performance.

Of course, every time they offer their actual best, but there are few occasions when really everything comes together and for four minutes everyone around the pool and in front of the TVs feels that this is pure magic. The judges also shared that impression and for the first time since 2010 a perfect mark of 10.0 points appeared on the scoreboard at the European Championships, in the company of a couple of 9.9s and 9.7s. (So Budapest is a lucky place in that sense, 11 years ago the Russians earned a handful of 10s in three events on the Margaret Island.)

Just as in the technical final, Ukraine and Austria claimed the other medals, and the mixed duet free also mirrored the ranks of the technical event: Aleksandr Maltsev and Olesia Platonova came first, ahead of the Spaniards and the Italians. The team free event saw history in the making: Ukraine’s victory and Spain’s silver were expected but for the first time Israel could step on the podium – the team members erupted in joy upon learning that their dream came true.

Russia’s golden charge continued in the diving pool. After coming 1-2 in the individual event, the Russians grabbed the women’s platform synchro title too. Iulia Timoshinina and Ekaterina Beilaeva sat in the second place before the last round but the Ukrainian pair of Ksenia Bailo and Sofiia Lyskun blew their final dive and was dropped to third. Just to highlight the contrast: while the Russians and the Brits, Eden Cheng and Lois Toulson, received 70+ points for their 407C (inward 31⁄2 somersaults), the Ukrainians earned only 48.06 and that was decisive.

The men’s 3m final produced the highest level so far in the diving competition. This evening only tiny mistakes left the athletes in the hunt for the top spots – a mediocre attempt meant an immediate bow-out. The two Russians quickly transformed the final to their in-house duel as Evgenii Kuznetsov and Nitika Schleikher produced outstanding dives. Kuznetsov, parading with huge beard, reminiscent of Viking warriors, kicked off his campaign with three 80+ jumps, while Shleikher came up with a 94.50 pointer in the second round.

Germany’s Martin Wolfram could keep up with them, compatriot and former (2010-11, 2014) champion Patrick Hausding, with two titles already under his belt, ran out of miracles this evening and finished 9th. Olympic silver medallist and 2018 victor Jack Laugher had a messy night with erroneous attempts in each even round to end up 6th.

On contrary, Shleikher even took the lead after the 4th round but Kuznetsov replied in style in the fifth for 94.50 points and he crowned the evening with the week’s first 100+-pointer on his last attempt. It secured his third title in this event after 2016 and 2019, but it was the first time he could score over 500 points. In fact, he got 525.20, an outstanding feat – and a stylish way to clinch Russia’s 100th gold medal in diving (Soviet Union included) in the history of the European Championships.