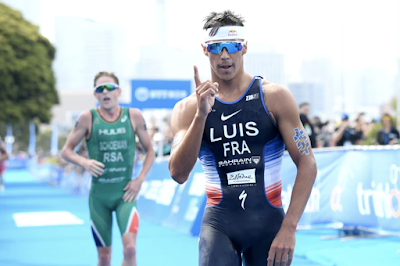 The hotly anticipated 2021 World Triathlon Championship Series begins this weekend in the Japanese city of Yokohama, when Saturday sees the defending men’s World Champion Vincent Luis (FRA) get his pursuit of a third straight title underway in what is all set to be a huge Olympic year.

It was on this very standard-distance course in 2019 that the Frenchman took the tape and what proved decisive points on route to his first world title. The standalone World Championships in Hamburg that marked the return to racing last August saw him retain that crown, as well as continuing a win streak that started in 2019 in Banyoles and has continued beyond Hamburg to Karlovy Vary, Arzachena and Valencia late last year.

There is little doubt that one of the favourites for the 2021 title intends to do everything in his considerable powers to continue that win streak right through the Tokyo Olympic Games to August’s Championship Series Finals Edmonton.

So who can halt the Luis juggernaut in Yokohama and who will be taking important strides towards Tokyo in the first WTCS of the Olympic Qualification Period? Wearing the number two and already assured of his Olympic starting place will be Fernando Alarza, silver medallist here in 2017 and bronze in 2018. A regular feature in the top five over the years, his remarkable consistency and trademark strong finish could help pile on the pressure over the closing stages.

The pedal power of big names like Marten van Riel (BEL), Jonathan Brownlee (GBR), Jonas Schomburg (GER) and Kristian Blummenfelt (NOR) will see them pushing hard on the bike to try and break up the field, with the lack of race practice likely to make for a fascinating middle segment.

Yokohama has some tight technical sections and wider turns that will need to be attacked strategically over the 9 laps if there is to be a significant breakaway during the largely flat 40km ride.

The position of key athletes as they rack the bikes and emerge out of T2 will be another deciding factor on the podium composition. There is little doubt of the potential for a rapid 10km run from the likes of Jelle Geens (BEL), Gustav Iden (NOR) and Brownlee, who delivered a devastating 29m 21s split to take the gold here back in 2013.

That was long before the likes of compatriot Alex Yee and Portugal’s Vasco Vilaca were on the elite scene, though, and both have proven their mettle at the very highest level. It was Vilaca who was Luis’ nearest challenger in Hamburg and Karlovy Vary at the end of 2020, and his two silvers marked him out as last year’s major breakthrough talent and undoubtedly one to watch in Yokohama.

Leo Bergere, Dorian Coninx and Pierre le Corre go into the first race of the Olympic Qualification Period eager to prove to the French selectors that they are the in-form choice to head to Tokyo, while Matthew McElroy and Morgan Pearson are among the five US men who know that a top eight finish should be enough to book them an Olympic spot.

Australia’s Jacob Birtwhistle will be looking to reignite his excellent form from 2019 that saw victories in Hamburg and Leeds, while Henri Schoeman (RSA) is another of the big names looking to get a feel for where his race fitness is after an extended break from the blue carpet.

Like Brownlee, Joao Silva (POR) is a former champion on this course in both 2011 and 2012, while the recently crowned Asian Champion Kenji Nener will hope to produce another big result on home soil after finishing 33rd here in 2019. A top-16 result will almost certainly guarantee Nener an Olympic start.