zekal3_3 2021-05-14 Fashion, Life & Love Comments Off on Para triathlon stars come out for first action of the season in Yokohama 20 Views 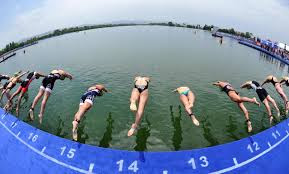 This weekend, the long-standing World Triathlon Para Championships Yokohama will assume even greater prominence in a huge Paralympic year for the biggest names in the sport, with the Tokyo 2020 Qualification Period reopened and after the postponement of the World Championships earlier this month. This will be the eighth year that the biggest names in triathlon and para triathlon take to the Yokohama circuit, and the anticipation levels have rarely been higher.

Once again, racing begins with a one-lap, 750m swim of the harbour course, heading out of T1 onto a fairly flat four-lap, 20km bike before the three-lap, 5km run finishes up in iconic Yamashita Park. From start to finish, you can watch all of Saturday’s action as it unfolds on TriathlonLive.tv.

As has been the case for the past five years, Jetze Plat (NED) will be the man to beat in the men’s PTWC wheelchair category. The winner here in 2018 by over two minutes, Plat has consistently cherry-picked his way to the top of the world’s most demanding podiums thanks to his incredible power and speed in the water and on the handbike. One man who knows him better than most is compatriot Geert Schipper who won here in 2019 and will certainly be ready to capitalise on any chinks in Plat’s armour should they appear. Ahmed Andaloussi (FRA) and Asian Champion Jumpei Kimura (JPN) will also be among those vying for the podium places.

The women’s race will surely see an intriguing battle between the experienced triple World Champion Kendall Gretsch and Japan’s Wakako Tsuchida, twice a winner here in 2017 and 2018. The Spanish star Eva Moral makes her fourth WTPS Yokohama appearance, the bronze she picked up in 2017 her best finish to date. Brazilian Jessica Ferreira continued to show her rising stature with World Cup gold in Alhandra at the end of 2020, and Mona Francis (FRA) is no stranger to the podium.

In the women’s visually impaired race it will be difficult to contemplate anything other than gold for Australia’s 2016 Paralympic champion Katie Kelly. Winner here in 2015 and second in 2019, she will be pushed all the way by newly crowned Asian Champion Atsuko Maruo and Annouck Curzillat (FRA). The men’s race will see Spain’s Jose Luis Garcia Serrano among the favourites following his win on this course in 2019. The 2017 World Champion Antoine Perel (FRA) will certainly be a threat to the Spaniard, however, finishing one place behind in their last competitive race, the Alhandra World Cup. USA’s Aaron Scheidies, dominant for so long in the category, and rising star Kyle Coon will certainly be in the medal hunt.

With no women’s PTS3, the men’s race will also be an all-in chase for the medals between three athletes; Victor Chebotarev (RTF), winner at the Series event in Devonport at the start of 2020 and the man who beat him here in 2019, Netherlands’ newcomer Nico van der Burgt, with Alexey Petukhov (RTF) making his Series debut.

France’s dominant Alexis Hanquinquant will look to build on a peerless 2019 that saw him take gold in all four top-tier events including the Lausanne Grand Final. The only man to beat him in 2019 was Mikhail Kolmakov (RTF) in Tokyo, and the return to Japan could see another upset this weekend. USA’s Jamie Brown returns to the site of his gold medal win in 2017, while Michael Taylor (GBR) will be the youngest man in the field by 6 years and is representing the new generation of British para triathlon talent. In the women’s race, Japan’s Mami Tani will be hoping she can produce some home-course magic against the ever-impressive Kelly Elmlinger (USA).

In the ever-competitive men’s PTS5 category, German Paralympic Champion Martin Schulz will lead the line. The former World Champion will make his Yokohama debut against the likes of George Peasgood, the Brit who will be looking to banish a disappointing Lausanne Grand Final and channel the spirit of his 2017 gold on this course. Japan’s Tetsuki Kaji represents the young talent emerging in Japan and is fresh from his Asia Triathlon title last month. The women’s race sees Ukraine’s Paralympian Alisa Kolpakchy facing Gwladys Lemoussu, a three-time medallist in Yokohama, and Hungarian Petra Levay, whose first appearance on this course came back in 2015.