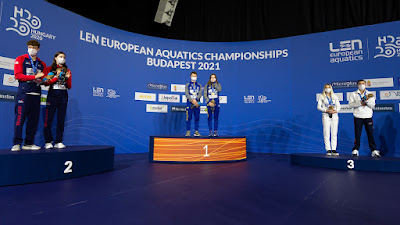 Ukraine clinched two titles on the second day in Budapest: one in artistic swimming and one in diving. Marta Fiedina won the solo technical, while Kseniia Bailo and Oleksii Sereda came first the mixed 10m synchro despite practicing only for a week together. The last final brought two medals for Italy, Elena Bertocchi finished atop, Chiara Pellacani came third.

As usual in artistic swimming, if no Russian in the competition, the road opens up to the top of the podium – and this time it was Ukrania’s Marta Fiedina who went all the way in the solo technical. Her routine was rated slightly higher than Greece’s Evangelia Platanioti’s fine performance, the gap was 2.5 points. The bronze went to Vasilina Khandoska from Belorussia.

The mixed synchro event in diving offered some real excitements. For a while Russia’s Victor Minibaev and Ekaterina Beliaeva seemed to have it but their last two dives went wrong and the rivals thanked the opportunity. 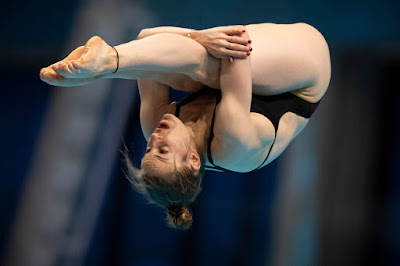 Ukraina’s golden boy Oleksii Sereda and championship rookie Kseniia Bailo came up with the best effort of the evening, an 80-pointer in the fourth round and their last dive was also good enough to land the title. It’s a fairy tale story for the two since they had one week to practice together, after a sudden illness had brought the originally nominated duo down. Sereda, still only 15, but visually stronger than he had been in Kiev 2019 when he had become the youngest ever European champion, continued his winning streak from two years ago. He also paraded with a couple of English comments, another significant change for the shy boy we knew from Kiev. 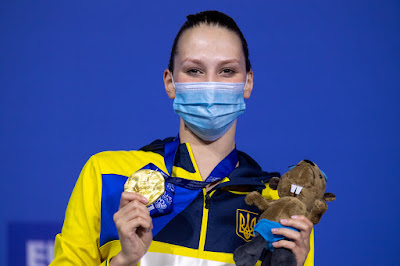 Britain’s Noah Williams and Andrea Spendolini-Sirieix also surprised themselves with the silver medal as they spent a single hour with joint trainings before the competition – sometimes less is more, as the saying goes.

The first individual final saw Italy’s first gold here in Budapest. Until the last round Chiara Pellacani was in pole position but at the end it was compatriota Elena Bertocchi who finished atop. All divers were a bit tense, perhaps the 2017 champion managed to stay the calmest among them to win the event by 4.35 points ahead of Michelle Heimberg. The Swiss had written history by becoming the first-ever diving medallist for her country and now she added a silver chapter to the story. Pellacani had to settle for the bronze at the end, trailed by 1.4 points behind the Swiss. 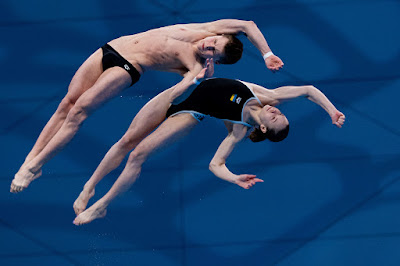 “I'm so happy with this gold medal, because this is my best result so far. I loved to perform here, but it was a little bit strange in the front of empty tribunes. I got more points in Gwangju, at the world champs, but now it was enough to win, and this is the most important!”

“I’m very happy, this medal was my dream since 2016, but never happened. Because in the last Europeans I didn’t get it, so now it finally arrived and I’m really satisfied. Now, I feel more mature and ready for the future.”

“I am really happy with the performance and the result. It is good to open a Championships in this way. It was my initiative to choose this music and the choreography is by Ilena Voronova. My next competition is solo free, duet free and duet tech. I never comment the score and prefer not to. It feels good to compete again. We had no quarantine and not much has changed for us – we train pretty much like we used to. My goal is to keep improving and getting better.” 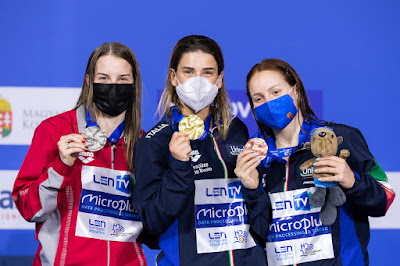 Kseniia Bailo: “At this moment, after the competition, I feel a lot of sensations. But to sum up I am happy, this is my first senior European Championship and to start with the gold medal at the first competition is something great. I am really satisfied for the gold at the first attempt.

Oleksii Sereda: “I am absolutely happy. We are a new pair, practiced together roughly a week only. The other boy got sick and we had to start training a week ago. We didn’t expect the gold medal, we realised that we could get a medal, but not the gold one. So I’m so happy for that.”

Noah Williams: “It is our first time to compete together. We only trained for one hour before the start. It was great to go in and shake of the nerves. It's my first competition since March last year so it was good to break the ice and get used to the pressure. I next compete on Thursday and it's my first Europeans competing individually. I don't have too many expectations, I just want to give my best.”

Andrea Spendolini-Sirieix: “I am very excited. This is the first time ever for us as a team. It's a great start of the Championships and a chance to get used to the competition. This is my first European senior championships. I am grateful. It was amazing and it's been a lot of fun.”

Viktor Minibaev: “We are not happy. We had problems in the last two rounds and we made bad dives. It is my first competition after Covid19. Ekaterina competed in Tokyo. For me the 10m synchro is next.”

Elena Bertocchi (ITA) 259.90 “To be honest, I am really satisfied with this medal, I didn’t expect it at all. My last competition in Italy didn’t go well so I came here a bit unconfident. Dive after dive I felt better and more confident and tried to bring back the feelings I had in Budapest 2017, where I won the bronze medal in the 1m at the Worlds. That turned out to be the path to victory.”

Michelle Heimberg (SUI) 255.55 “This silver medal is amazing, after all this pandemic we couldn’t train properly at home, so here I will try to show my best and have fun with the competition and with what I am doing. This is my first silver medal in the 1 metre and the second European medal for Switzerland ever, so I hope it helps to make diving more popular in my country.”

Chiara Pellacani (ITA) 254.15 “I am really satisfied as this is my first individual medal. I felt good, had a lot of fun. I tried to give my maximum so I am really content. It is an award and the result of the hard work I put in over the years. Tomorrow I compete in synchro mix with another partner. He is only 14 years old. I hope to have fun and give my best”.