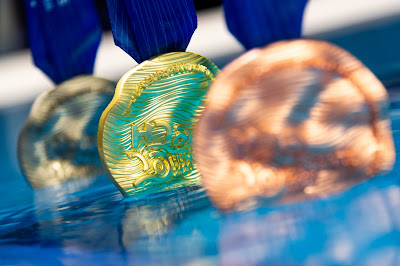 Russia clinched two titles on the opening day at the European Aquatics Championships, grabbed gold in the mixed duet technical in artistic swimming and won the team event in diving. The Italians claimed a silver and a bronze on Monday.

It seemed inevitable that the first title will go to Russia – in the mixed duet Aleksandr Maltsev and Mayya Gurbandiyeva was a sure bet as their Italian arch-rivals could not be present due to Covid-infections. Giorgio Minisini and his actual partner caused a couple of upsets in the past but Maltsev&Co., already superior in 2019, was a cut above the rest in the current field.

Spain’s Pau Ribes and Emma Garcia did its best and deserved the silver, while the young couple of Nicolo Ogliari and Isotta Sportelli from Italy managed to reach a fine level in ten short days to earn the bronze ahead of the Slovakians.

According to the schedule, the Russian duet of Svetlana Kolesnichenko and Svetlana Romashina should have won the first title in the Duna Arena but due to a technical failure of the under water loudspeaker system the duet technical final had to be halted. It was then rescheduled for Thursday morning while the team free prelims were cancelled in the same session since the number of teams entered (8) is equal with the number of spots in the final.

The diving competitions kicked off with the newly shaped Team Event where each team had to perform dives from 3m (one man, one woman, and one synchro) and from 10m (same). Germany was leading after the springboard part but in the platform they were overtaken by the Russians and at the end by the Italians as well.

World champion Evgenii Kuznetsov of Russia came up with the best dive of the night, he got 96.90 for his attempt on 3m. It’s going to be a great duel with Partick Hausding – by securing the bronze, the German legend has already carried on writing history as he never left a single edition of the European Championships without a medal, so his incredible streak, started in 2008, has already been extended.