Strong comebacks for the British and Slovak Canoe Slalom Teams 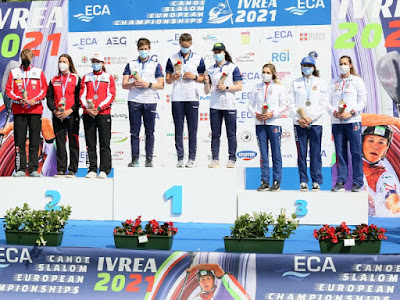 The second competition day at the 2021 ECA Canoe Slalom European Championships in Ivrea brought the first medallists of the weekend. Great Britain returned to the competitions after one year of absence with a style, winning a whole set of medals – gold, silver and bronze. Slovakia, who was also missing last year, won two gold medals today.

The first team event of the Championships – women's kayak race – brought the first medal for Great Britain. Kimberley Woods, Fiona Pennie and Mallory Franklin made an impressive run to win gold medal at the 2021 ECA Canoe Slalom European Championships on the Dora Baltea River. It was a dream come back after British team missed out last year's European Championships in Prague due to Covid-19. The British trio was more than two seconds faster than Austrians Corinna Kuhnle, Viktoria Wolffhardt and Antonia Oschmautz, while Czech team with Katerina Minarik Kudejova, Veronika Vojtova and Antonie Galuškova finished third.

The celebration of the first medal was not yet over when the British men's kayak team picked up bronze medal. Joe Clarke, Bradley Forbes-Cryans and Christopher Bowers were third, 2.31 seconds behind the winning team. Jiri Prskavec, Vavrinec Hradilek and Vit Prindiš were the ones who celebrated European Champion title, ahead of Germany with Hannes Aigner, Tim Maxeiner and Stefan Hengst finishing second. 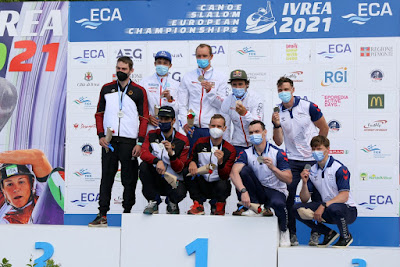 A young Slovak women's canoe team a bit surprisingly took the gold medal in this event. Simona Glejtekova, Zuzana Pankova and Monika Skachova were the only ones who managed to produce a clean run and were at the end 4.29 seconds ahead of Great Britain. It was the second medal of the day for Franklin and Woods as they were also part of the kayak team that won European Champion title. Sophie Ogilvie was the third member of silver British team. France with Marjorie Delassus, Lucie Prioux and Angele Hug was third. 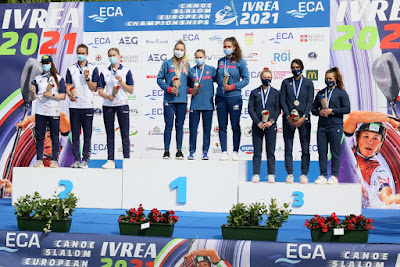 The same as their team colleagues in women's canoe Slovak canoeists Michal Martikan, Alexander Slafkovsky and Matej Benuš produced a clean run to claim the European Champion title. This was their 12th men's C1 team event gold. Legendary Michal Martikan was a team member on all twelve occasions. The two Slovak teams were actually the only two teams of the whole competition who had penalty free runs today. Italians Roberto Colazingari, Raffaello Ivaldi and Flavio Micozzi were second, and Slovenian team with Benjamin Savšek, Luka Božič and Nejc Polenčič finished third. 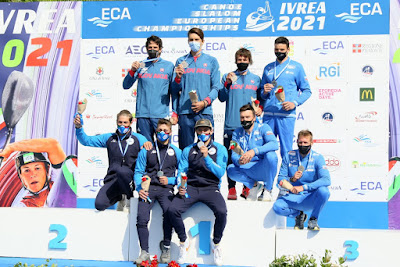 In the morning part of the programme women's and men's canoe heats were held. Mallory Franklin from Great Britain produced the best run in women's C1, defending champion Gabriela Satkova from Czech Republic was second and young Slovak canoeist Zuzana Pankova was third. In men's canoe Slovak Alexander Slafkovsky finished the heats at the top, 0.80 seconds ahead of Italian Raffaello Ivaldi and 1.02 seconds ahead of defending champion Benjamin Savšek from Slovenia.

On Saturday we will follow the semifinals and finals in women's and men's kayak events and time trials of the extreme canoe slalom.

AUT, CZE, ITA, SLO, SVK will be geoblocked online due to the TV rights restrictions. For all the details visit: bit.ly/2Rumo9j