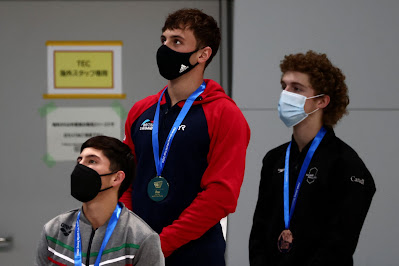 The 2021 edition of the FINA Diving World Cup successfully concluded today at the Tokyo Aquatics Centre, the venue for the disciplines of Swimming, Diving and Artistic Swimming at this summer’s Olympic Games in the Japanese capital. During the six-day competition, from May 1-6, 225 athletes representing 46 nations were in action, seeking their “ticket” to be present in the Olympic rendezvous.

Amon men, the dominance of Great Britain was evident, with its best representatives earning three out of the four medals at stake. The only exception occurred in the 3m springboard, where Germany’s Martin Wolfram got the sole title for his country in the competition. Totalling 467.75 points, Wolfram left James Heatly (GBR) in the second position (461.25) and Alexis Jandard (FRA) with the bronze in 434.25.

In the 10m platform, it was Thomas Daley’s show, with victories in the individual and synchro event. The British superstar paired with Matthew Lee in the team event, scoring 453.60. Individually, he got the title in 541.70. Curiously, in both events, the minor medals went to the same countries: silver for Mexico with Randal Willars in individual (514.70) and with his teammate Ivan Garcia in synchro (405.69), and bronze for Canada, with Rylan Wiens shining alone (488.55) and the pair Vincent Riendeau/Nathan Zsombor-Murray climbing to the podium in synchro (393.81).

In the 3m springboard synchro, the winning tale was also British, with Daniel Goodfellow and Jack Laugher taking the crown in 440.94. Patrick Hausding/Lars Rudiger, from Germany, had to content with silver in 433.93, while the bronze went to Russia’s Evgenii Kuznetsov/Nikita Shleikher (415.86).

Among women, the Chinese domination in the 3m events was notorious, with Chen Yiwen triumphing alone in 383.55 and pairing with Chang Yani for gold in the synchro competition (317.16). Chang was also medallist (bronze, 344.40) in the individual event, showing an extraordinary courage after losing the balance and violently hitting the board with her legs in the semi-final. Sarah Bacon (USA) took the silver in 348.75.

In 3m synchro, the remaining medals went to Canada (silver in 289.98 with Jennifer Abel/Melissa Citrini Beaulieu) and to Italy (bronze in 283.77 with Elena Bertocchi/Chiara Pellacani).

In the 10m platform finals, Pandelela Pamg (MAS) was the winning card in the individual final, totalling 355.70. She was followed by Matsuri Arai (JPN), with 342.00 points and by Caeli McKay (CAN, 338.55). In synchro, Canada (Meaghan Benfeito/Caeli McKay) was the strongest team in the field, getting the title in 305.94. Lois Toulson/Eden Cheng gave the sole medal for Great Britain in the women’s events, earning silver in 302.88. Germany’s Christina Wassen/Tina Punzel completed the podium in 292.86.

Working also as a test event for the Games, the FINA Diving World Cup was the third and final qualification step for the Olympics, after the 2019 FINA World Championships in Gwangju and the continental qualification since then. In individual, the World Cup may qualify up to 18 athletes in each event, while in synchro, four teams were selected during the six-day competition in Tokyo.