Thomas Daley “Pressure? No, I just want to enjoy the 2021 Tokyo Olympic Games” 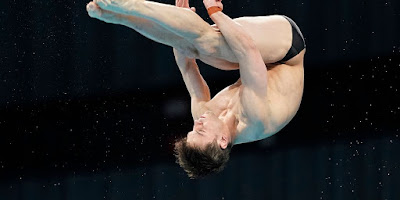 It was the last night of the Aquatics programme at the 2012 London Olympic Games, Saturday, August 11. At home, the British team hadn’t shone in the pool (all FINA disciplines included) and the final of the men’s 10m platform was on: Thomas Daley carried the enormous responsibility of getting a medal on that evening. And he did it, taking the bronze in front of an ecstatic crowd, making the media headlines the following morning. The diving poster boy didn’t fail, and only Qiu Bo (CHN, silver) and David Boudia (USA, gold) could do better. But for an entire nation, Daley had won. That was enough to save the entire fortnight and the disappointment it provoked until that Saturday evening.

At 18, he confirmed then his stardom status in the diving world, where he started having success from a very early age. Four years before, at the age of 14, he was the youngest British athlete at the 2008 Olympics in Beijing and less than one year later he was a very young world champion in Rome 2009, in the 10m platform.

Fast forward to 2021 and we find Daley fighting for the top positions at the FINA Diving World Cup. With two Olympic (after the London achievement, he was also bronze medallist in Rio 2016, this time in the synchronised event), and six World Championships medals (including three gold), the British ace is definitively a sport star in his country and in the diving world, and is optimistically waiting for his participation at his third Games.

At the Tokyo Aquatics Centre, he has been given very solid indications during this World Cup: after the gold in the 10m synchro, he was amazing in the individual event, finishing first in 541.70 and only spoiling his entry on the forward 4 ½ somersaults (tuck). After a traumatic experience in Rio, where he didn’t qualify for the individual final, he compensated that accident by becoming world champion in 2017 in Budapest, eight years later his first crown in the Italian capital.

For the Olympics, the British ace will propose the same programme, including an “easy” inward 3 ½ somersaults, in the tuck position (DD 3.2).

“In an Olympic year, I don’t like to change things too much, as I want to practice those dives the maximum I can. Also, we don’t have so many competitions, so better to keep this programme as it is. I know that the Mexican diver is doing it in the pike position, but he is shorter than me and I am already 26…”

Commenting on the Olympic venue, Daley is quite enthusiastic on the idea of competing again soon in the Tatsumi facility: “It’s amazing. The way it is designed, the surface of the board, and I especially like the way scoreboards are facing the spectators – the athletes don’t see them and you can be really focused on your dives!”

Reflecting on his training shape at the moment, he recalls the difficulties related with the COVID-19 pandemic. “It’s quite hard to keep a consistent training programme for so long, without having the opportunity to compete. At the end of the day, we train with the goal of competing. So, it’s very good to be here right now, competing, feeling this atmosphere and working on a couple of things that need improvement. So, it was very nice to come to Tokyo and to evaluate where I am at the moment!”