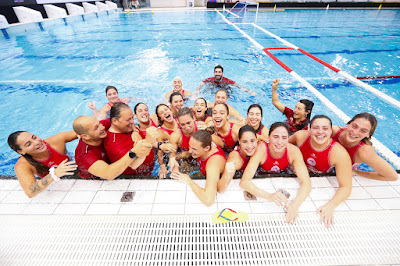 Olympiacos won a hard-fought battle over Dunaujvaros to secure its second triumph in the Euro League. The lead was exchanging constantly as the finalists tried to overplay the extremely organised defences and beat the goalies who offered brilliant performances respectively. A single goal in the final period gave the win to the Greeks. The bronze medal went to UVSE which enjoyed a fine afternoon while beating Uralochky in an entertaining encounter.

Just like in the semi-final played by Olympiacos, the opening period produced a huge tactical battle where six on six attacks didn’t bring any fruits, all goals came after man-ups. Olympiacos was 3 for 3, Dunaujvaros missed its first before netting the next two so the Greeks led 3-2 after eight minutes.

Alda Magyari made a huge save in the first man-down in the next period and Dorottya Szilagyi scored one from action at the other end and added a man-up goal 44 seconds later for 3-4. Olympiacos equalised from a 5 on 4 (extra after a double exclusion) but missed its next man-up as Magyari had another stop. The other red-capper Chrysoula Diamanthopoulou was also up to the task and denied the Magyars in three straight man-downs. Those were costly misses as the Greeks earned a penalty 16 seconds before the middle break and Alkisti Avramidou buried it for a 5-4 halftime lead.

After a missed man-up, Krisztina Garda let the ball fly from the distance and scored his third from 7m for 5-5 early in the third, followed by erroneously played 6 on 5s at both ends (the Greeks stood 4 for 8, Dunaujvaros 3 for 9 at this stage). The centres delivered a penalty apiece, Magyari saved Margarita Plevritou’s shot while Krisztina Garda converted for 5-6 – but soon Olympiacos managed to score its first goal from action, a fine ‘sneaking’ shot by Christina Tsoukala. But they hit the post from their last man-up in the third so it stood 6-6 before the final period.

The time-out didn’t help the Greeks’ conversion early in the fourth but Dunaujvaros had problems too (indeed only two of their players could score in the entire match). The following minutes were devoted to physical battling and the tiring players couldn’t create any danger. With 2:54 remaining, Olympiacos earned a man-up, called for a time-out and finally Vasiliki Plevritou broke the ice from the left wing for 7-6. With 1:26 on the clock, Dunaujvaros had the same scenario, a man-up after a time-out but it ended differently, Szilagyi was blocked, just like in the following – and last – man-up and that sealed Olympiacos’ second triumph after 2015.

UVSE was dominant in the bronze medal match. The Hungarians took a flying start, led 3-0 and 4-1 and even though Uralochka came back to 5-4 but UVSE replied with a 5-2 run still inside the second period. It was interesting to see a new approach from the Russians who routinely applied 7 on 6 attacks in their last possessions in the first two periods, however, they couldn’t score from either. Instead, a blocked shot returned the ball to UVSE and Gabriella Szucs could send the ball to the empty net to beat the buzzer too for 10-6. The gap didn’t change in the third, UVSE had a couple of fine chances to finish off the game at 13-8 but they missed them and the Russians pulled one back before the last break. The final quartet brought the inevitable though, two more hits from the Magyars, including a 4th from Rita Keszthelyi, ensured that UVSE finished the event on a high note.

“I cannot say how proud I am of these girls. At the beginning of the season we could not even imagine that we would be able to go all they way. Again, just like yesterday, the level of game wasn’t too high, we could play much better than this I can assure everyone. We won this final with our defence. The girls defended like maniacs in the last period, that was absolutely the key of this.”

“I can’t really understand why this game had to go like this. I have three centre-forwards, they could spend five minutes in the water altogether. There is no way to play normal water polo like this. Somehow they were excluded one by one… I’m not really happy now, though the second place is a great result for us, no doubt.”

Krisztina Garda, player, Dunaujvaros “I think we ran out of energy at the end, we lost two key players from our starting seven and that definitely weakened our offence. We tried to give our best but today this was our maximum. I think, we can still be proud of our season.”

“I have the greatest team in the world. I saw my old players crying yesterday after we were practically destroyed but today they came back as if nothing had happened and showed character and played brilliantly. Obviously, we are disappointed as we didn’t come here for the bronze medal but we won a great game today against a team which plays one of the most wonderful water polo in Europe. It was a real honour and pleasure to train these players – now we’ll see what the future beholds but there is a chance that this was the last match for this team with this current line-up.”

“You may say we play a great water polo but the approach of the referees was absolutely different from what we got used to. This was more like a junior game, I couldn’t understand why they called so many exclusions. We are disappointed but it was a good experience for the team to play in this tournament.”

“We cried yesterday and we cried today for different reasons. It was a tearful farewell as it’s uncertain who will play in this team from next season, but at least we showed our strength. We talked a lot yesterday evening and came back here that there was only one way to finish this season – to win this match. And we won it with a really high-flying performance, not a single moment you could feel that anyone of us was tense or nervous. There is only one thing what’s a bit upsetting that in the whole season we lost only one match in the Euro League, the semi-final yesterday but we ended up third only. But life goes on, we’ll see what happens after the Olympics but since this club has an amazing pool of age-group players, I do think UVSE shall not disappoint its wonderful fans.”