zekal3_3 2021-04-26 Sports, World Comments Off on To A Coach Dying Young: In Remembrance of Mark Halvorson of De La Salle Wrestling 79 Views

A. E. Houseman wrote the elegiac poem "To An Athlete Dying Young." It's haunting. mysterious beautiful and tragic. It resonates with too many of us for sports has carried more than one story of the subject: Jill Costello. Hank Gathers. Jose Fernandez. Len Bias. The list looms long. But where is the elegy or the essay for the coach who dies young? Perhaps that will be the story of Mark Halvorson, the head coach of wrestling at De La Salle High School. He died of a fatal heart attack on February 15, 2021. 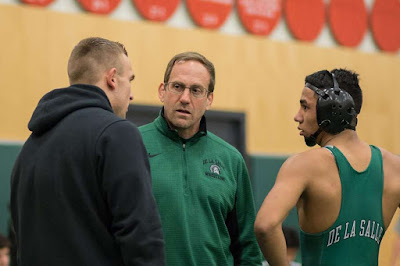 Comparatively speaking, Halvorson was not young. Costello was 21; she had just gradated from Cal Berkeley. Gathers died at age 23 after collapsing for the second time that season during the semifinals of the WCC Tournament in 1990. I still remember my students who prayed for the family of Fernandez. He was but 24 years of age and a rising superstar. Bias never had the chance to prove his greatness. He died at the age of 22 two days after he was drafted by the Boston Celtics.

Mark Halvorson was 57 years young. I learned of his passing in The Union, the alumni magazine of De La Salle High School. I could hardly believe what I read.

I never met Coach Halvorson, but I taught about his in many of the presentations I give to coaches. Why? It's easy for me to say that I wrestling fascinates me. As one of the original Olympic sports, I can't help but have respect for these athletes. But his outlook and philosophy made me take notice. He said,

The early years at De La Salle were challenging, as the program was still very young. “We were just trying to teach the kids to like the sport of wrestling. That first year, there was no wrestling culture. My team goal was to finish 3rd place in league, and the kids thought I was out of my mind,” said Halvorson. “It was more about teaching than training, and we were constantly motivating the kids.”

I love that he named a realistic goal. DLS is dominant in so many sports. To enter into the community and set your eyes on third place? I have no doubt this athletes questioned his vision. Who wants the bronze?! But Halvorson's sight and his vision were in line. I ripped this page out and have kept it under my coaching file all these years. Good stuff. 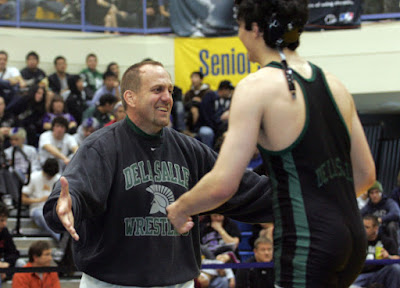 As a cross country coach, I understand the challenge a coach is presented with in getting an athlete to like the sport. However, I find that challenge to be a worthy one.
"Teaching, training and motivating"—that's the stuff that makes the impossible possible and that which is hard—well, not necessarily easy…but enjoyable in its own right. What a gift for a young person to discover, encounter and embrace.
The team culture that Halvorson is responsible for at De La Salle is but one part of his legacy. In the article "Colleagues stunned by death of De La Salle's Unforgettable Coach," Mitch Stephens writes, He "elevated the Spartans to unprecedented heights — 11 North Coast Section championships in the past 12 years — but he was also regarded as one of the nation’s most influential leaders within USA Wrestling’s national Greco-Roman program." 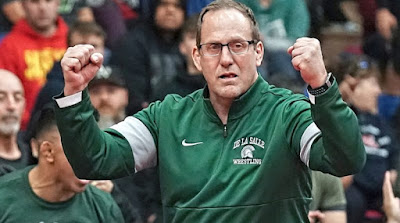 De La Salle Athletic Director, Leo Lopoz said "He brought the attributes of just a living, caring person and always wanting to make himself available.
“Wrestling is a tireless sport for coaches. State wrestling is like five days. His unselfish behavior for others cannot be matched. He did things that other coaches just couldn’t or wouldn’t do and the sacrifices he made for others resulted in the love and admiration that is flowing from all of the student-athletes and coaches of the past couple of decades.It’s unfortunate that his career was shortened.”
And so it is. To a Coach Dying Young, we honor the late Mark Halvorson.
I would like his former wrestlers, family and friends to know that I dedicated the prayer during my session: "Mission of Sports, Vision of Spirituality: Athletics in Holy Cross Education" at the Holy Cross Institute in his honor. Other coaches and ADs throughout the country will continue to learn about his philosophy and his story.
Eternal rest grant unto them, O Lord, and let perpetual light shine upon them.
Photo Credits
Coach and wrestler
Hug
VictoryOriginal Article