zekal3_3 3 weeks ago Videos, World Comments Off on Ukraine Warns Russia That It Will Bear ‘Very Painful’ Consequences If It Invades 7 Views 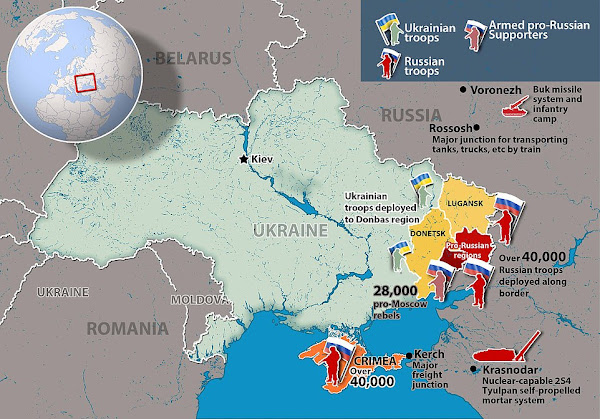 Putin is continuing to build up his forced on the border with Ukraine, as the government warns troops numbers could swell to 110,000 with 7,000 tanks and other vehicles in support

Daily Mail: 'Russia is threatening us with destruction': Ukraine warns Putin he will 'bear very painful consequences' if soldiers cross the border after President Biden CANCELS deployment of US warships despite Moscow's military build-up

* Ukrainian foreign minister warned today that Russian is 'openly threatening us with destruction' as he met with his counterparts in Estonia, Lithuania and Latvia – all NATO allies

* He spoke as it was revealed US will not send ships to the Black Sea, after Moscow warned them to stay away

Ukraine has warned Russia that it will bear 'very painful' consequences if it invades as Vladimir Putin continues to mass his forces in eastern Europe.

Dmytro Kuleba, the country's foreign minister, said today that Moscow is 'openly' threatening Ukraine with 'destruction' by stationing 80,000 troops along its border – with more arriving every day – calling on western allies to provide more practical support and warning that 'words are not enough'.

He spoke following a meeting with the foreign ministers of Lithuania, Latvia and Estonia – NATO allies in the region – saying 'the four of us condemn the exacerbation of the situation by Russia.'

WNU Editor: Nothing much will be coming from this …. Zelensky to meet with France, Germany on Russia tensions (The Hill).

More News On The Continuing Tensions Between Russia And Ukraine