Prince Philip Dead At 99: Queen Announces With ‘Deep Sorrow’ That Her Husband The Duke of Edinburgh ‘Passed Away Peacefully At Windsor Castle’ This Morning

zekal3_3 4 weeks ago Videos, World Comments Off on Prince Philip Dead At 99: Queen Announces With ‘Deep Sorrow’ That Her Husband The Duke of Edinburgh ‘Passed Away Peacefully At Windsor Castle’ This Morning 14 Views 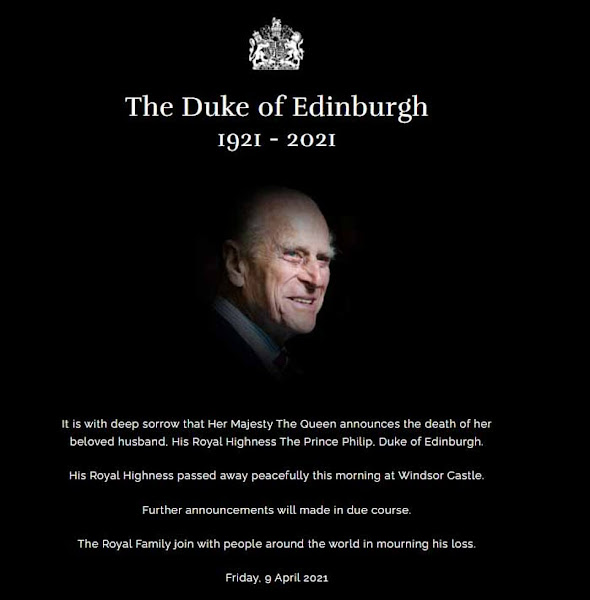 Daily Mail: Prince Philip dead at 99: Queen announces with 'deep sorrow' that husband the Duke of Edinburgh 'passed away peacefully at Windsor Castle' this morning – three weeks after he finished 28-night hospital stay for infection and heart surgery

* After retiring, Philip spent much of his time at Windsor and at Queen's private Sandringham estate in Norfolk

The Queen today announced with 'deep sorrow' the death of her husband Prince Philip at the age of 99, her 'strength and guide' throughout their 73-year marriage and her 69-year reign.

The Duke of Edinburgh spent his final days at Windsor Castle with his wife, who he lovingly called Lilibet throughout their long life together, after a 28-night stay in hospital having been admitted in mid-February for an infection and a pre-existing heart condition.

Her Majesty announced her husband's death at midday as the Union Flag was lowered to half-mast outside Buckingham Palace and on public buildings across the UK and Commonwealth.

The Royal Family said in a statement: 'It is with deep sorrow that Her Majesty The Queen announces the death of her beloved husband, His Royal Highness The Prince Philip, Duke of Edinburgh.

WNU Editor: He definitely lived an incredible life …. Obituary: HRH The Prince Philip, Duke of Edinburgh (BBC). More here …. The Duke of Edinburgh obituary (The Guardian), and here …. The extraordinary life of Prince Philip: Born on a kitchen table in Corfu, the prince with Danish, German, Russian and British blood who was carried into exile aged just one and overcame the trauma of an absent father and mother to fight for his country (Daily Mail).

More News On The Death Of Prince Philip

Operation Forth Bridge begins: Queen enters 'eight days of mourning' as master plan for Philip's funeral that the Duke helped draw up himself is enacted but with Covid contingencies for royal ceremonial service and burial in Windsor and military procession — Daily Mail

Prince Philip: World leaders react to the death of the Duke of Edinburgh — BBC

'His job, first, second and last was never to let her down': The magical marriage of the Fairy Princess and Prince Charming cheered post-war Britain and lasted 73 years — Daily Mail

A life in pictures – Prince Philip — The Guardian