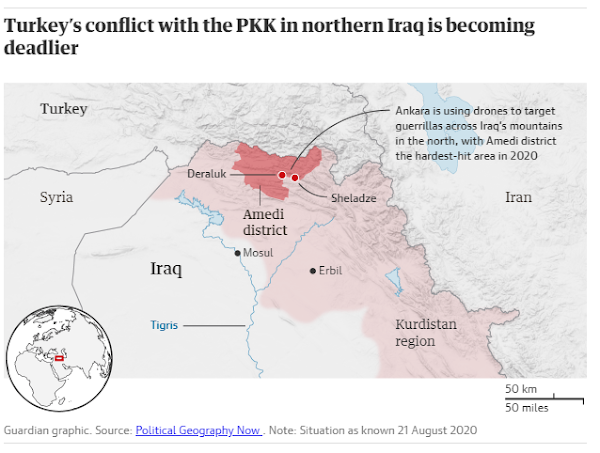 The Guardian: Kurds in 'mountain prison' cower as Turkey fights PKK with drones in Iraq
As decades-old battle intensifies, civilians count cost in lives and livelihoods
It took 10 days to find Muhsin Speri’s body. The 64-year-old had left his town in the mountains of Iraqi Kurdistan along with friends Hassan Sadiq and Safar Sini on a dry, windy day in December last year to fish and forage for wild honey and mushrooms.
Life in the Amedi region of the Zagros mountains is hard and physical, but the area has been home to Kurdish and Assyrian communities in sync with the rhythms of the mountains for thousands of years. Many locals like to roam and camp for several days at a time, but after Speri’s family failed to reach him by phone for more than a week, a search party was launched.
The bodies of the three former peshmerga soldiers were found in the Zeri valley, torn to pieces by what is believed to have been a Turkish drone strike. Sadiq and Sini appeared to have been killed instantly, but Speri was found nearly 100 metres away, a trail of blood in his wake.
Read more ….
WNU Editor: The Turks are not the only ones targeting the Kurds …. Iranian-backed militias accused of targeting Kurds in Iraq (Jerusalem Post). More here …. Iraqi Militia Attacks Against Kurdish Peshmerga Benefit The Islamic State (Forbes).Original Article