zekal3_3 2 weeks ago Videos, World Comments Off on Beijing Tightens Its Grip on South China Sea By Using Swarms Of Ships To Intimate Other Countries’ Vessels Out Of Disputed waters 6 Views 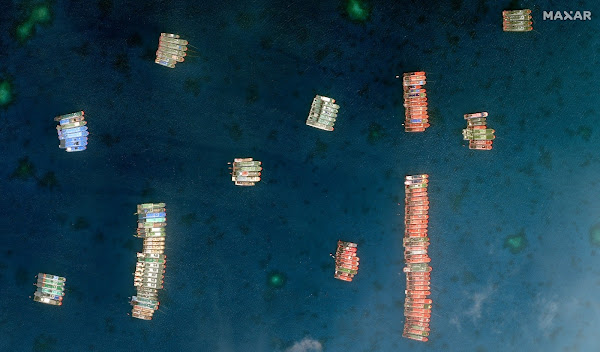 A satellite photo of Whitsun Reef on March 23. At one point in March, 220 Chinese ships were reported to be anchored around the reef.Credit…Maxar Technologies
New York Times: With Swarms of Ships, Beijing Tightens Its Grip on South China Sea
After building artificial islands, China is using large fleets of ostensibly civilian boats to press other countries’ vessels out of disputed waters.
The Chinese ships settled in like unwanted guests who wouldn’t leave.
As the days passed, more appeared. They were simply fishing boats, China said, though they did not appear to be fishing. Dozens even lashed themselves together in neat rows, seeking shelter, it was claimed, from storms that never came.
Not long ago, China asserted its claims on the South China Sea by building and fortifying artificial islands in waters also claimed by Vietnam, the Philippines and Malaysia. Its strategy now is to reinforce those outposts by swarming the disputed waters with vessels, effectively defying the other countries to expel them.
The goal is to accomplish by overwhelming presence what it has been unable to do through diplomacy or international law. And to an extent, it appears to be working.
“Beijing pretty clearly thinks that if it uses enough coercion and pressure over a long enough period of time, it will squeeze the Southeast Asians out,” said Greg Poling, the director of the Asia Maritime Transparency Initiative at the Center for Strategic and International Studies in Washington, which tracks developments in the South China Sea. “It’s insidious.”
Read more ….
WNU editor: In the case of the Philippines, it appears this tactic is working.Original Article