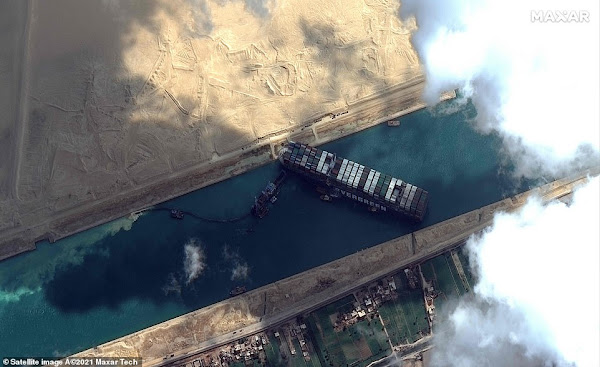 It is hoped that an especially high tide late Saturday will provide the best chance yet of refloating the vessel – with another two weeks until a similar tide returns
Daily Mail: Satellite image reveals true extent of the traffic jam caused by mega-ship lodged in the Suez Canal – as shipping firms call on US Navy for help amid fears cargo vessels are sitting ducks for PIRATES
* Container ship Ever Given remains lodged in the Suez Canal, causing a traffic jam spanning two continents * Satellite image reveals extent of the jam in the Red Sea, with 50 boats seen at anchor in the Gulf of Suez * Some 250 vessels are now caught in the backlog, as workers desperately try to dig the Ever Given free * The only alternative is to sail around Africa, but shipping firms have warned that could make cargo vessels sitting ducks for pirates and have been asking the US Navy to advise on the security situation
A satellite image taken above the Red Sea have revealed the true extent of the traffic jam building up behind the cargo ship that has lodged itself in the Suez Canal.
Some 250 vessels are now backed up at either end of the narrow waterway, waiting for the stricken Ever Given – a container ship as long as the Empire State Building is tall – to be moved so they can pass.
Images taken by a passing satellite show more than 50 vessels at anchor in the Gulf of Suez, one of two 'fingers' at the northern end of the Red Sea, where it enters the canal which leads to the Mediterranean.
Read more ….
WNU Editor: Here is a good summary on what to expect next …. Suez Canal Megaship "Partially Refloated" Ahead Of US Navy Assessment (Zero Hedge).
Suez Canal Blockage — News Updates March 26, 2021
Plan made to refloat ship blocking Suez Canal using tide — AP
Suez ship rescuers weigh time and tide with risk of tip or tear — Reuters
Attempt to refloat megaship blocking Egypt's Suez Canal fails — France 24
Maritime traffic jam grows outside blocked Suez Canal — FOX News
Suez Canal: Ships stuck in 'traffic jam' as salvage efforts continue — BBC
Navy sending team to Suez Canal to help dig out massive ship blocking passage — FOX News
Suez Canal: $10 billion in goods stuck in waterway — DW
Suez Canal authorities need to remove up to 706,000 cubic feet of sand to free the Ever Given — CNN
Suez blockage: The suspension of traffic through the vital waterway is set to disrupt world trade, which has already been plagued by the impact of the COVID-19 pandemic. — ReutersOriginal Article