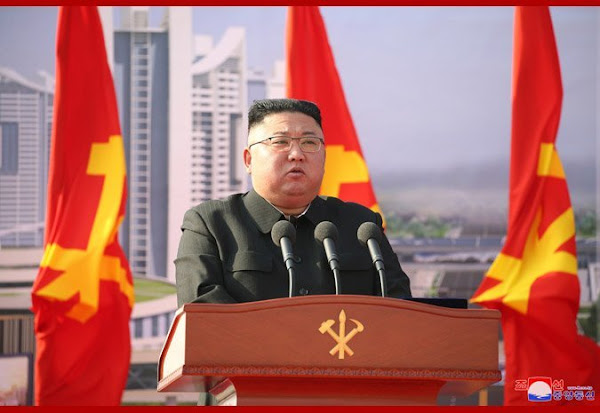 Kim Jong Un speaking. KCNA Photo
The SUN: DEFCON UN Kim Jong-un branded a ‘catastrophic threat’ as he secretly preps nukes, launches missiles and sells arms to terrorists
NORTH Korea has been branded a "catastrophic threat" to global security as Kim Jong-un quietly preps his nukes and keeps his coffers flush.
Kim's regime is pressing on with its quest for nuclear weapons – which it is funding through massive cyber heists, carrying out illegal trades, and even selling arms to terrorists.
Experts told The Sun Online of the ongoing threat posed by North Korea as US President Joe Biden prepares to meet what is likely going to be one of the major international issues of his time in the White House.
Scott Snyder, a senior fellow for Korea studies at the Council For Foreign Relations, told The Sun Online the regime is the most "potentially catastrophic security threat" in 2021.
Read more ….
Update #1: How dangerous is North Korea's military arsenal right now? (Brad Lendon, CNN) Update #2: UPDATED: North Korea Positioning Itself to Play ‘Nuclear Blackmail’ (USNI News)
WNU Editor: Talks between President Trump and North Korean Leader Kim Jong-un may have stalled in 2020, but there was an understanding between the two men on what was permitted and what was not.
That relationship does not exist between North Korean Leader Kim Jong-un and President Biden, and it looks like Kim Jong-un has now decided to ignore the understanding that he had made with former President Trump.
Bottom line. Expect more missile tests and even preparations for a nuclear test later this year or next.
One more thought. I suspect China told North Korea a few days ago to expect no criticisms from Beijing on what they are doing …. Xi, Kim share messages reaffirming China-N. Korea alliance (AP).
Update #3: North Korea and China will be on top of this agenda for this meeting …. S. Korea, US, Japan to hold high-level talks next week (Korea Herald).Original Article

Previous President Biden Blames Former President Trump For The Migration Crisis At the U.S. – Mexican Border
Next President Biden Will Have His First News Conference In The East Room Of The White House At 1:15 p.m. Eastern Time