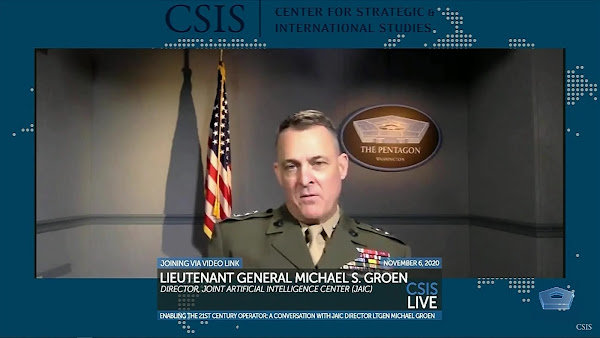 Defense One: China Is ‘Danger Close’ to US in AI Race, DOD AI Chief Says
JAIC leader stresses that AI ethics guidelines don’t slow down the United States. In fact, they are essential.
The Pentagon must move faster to standardize its data, adopt cloud services and integrate AI into operations if it is to keep ahead of China’s prowess in artificial intelligence, the head of the Joint Artificial Intelligence Center, or JAIC, said Tuesday. Beijing is accelerating its Made in China 2025 effort and aims “to be dominant in the AI space in 2030,” Lt. Gen. Michael Groen told a National Defense Industrial Association audience. He noted that Pentagon budgeteers are currently building five-year Program Objective Memorandums out to 2027. “You know, to a Marine, that’s danger close,” Groen said.
Read more ….
WNU Editor: This U.S. report is saying the U.S. is already behind …. U.S. ‘Not Prepared To Defend Or Compete’ With China On AI According To Commission Report (Warzone/The Drive).Original Article

Previous U.S. Imports Of Oil From Russia Grew In 2020
Next F-35B Was Damaged By A Round Fired From Its Own Cannon that Exploded