zekal3_3 4 weeks ago Videos, World Comments Off on India Faces Second Wave As Covid Cases Surge To 260,000 A Week 9 Views 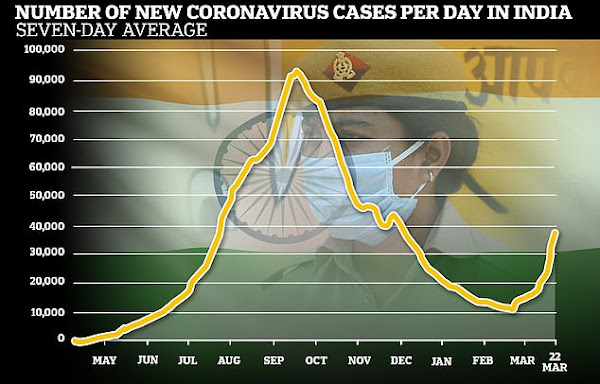 India's infection rates have surged to their highest levels in months with 46,951 new cases added to the tally today in the biggest one-day jump since November 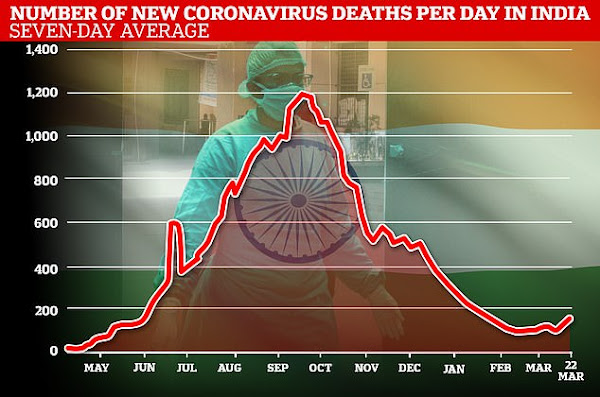 Deaths are also climbing again with another 212 announced today, the first time the daily toll has climbed above 200 since the middle of January
Daily Mail: India faces second wave as Covid cases surge to 260,000 a week: Pressure grows for vaccines to be used at home rather than exported to countries including Britain
* India saw 46,951 new infections today in its biggest daily jump since November * Spotlight has turned on jab roll-out with more doses exported than used at home * Hold-ups in India were blamed last week for delayed jab shipments to Britain
A second wave of the pandemic is looming in India with Covid-19 cases rocketing to their highest level in months and pressure growing for vaccines to be used at home rather than exported to Britain and around the world.
India added 46,951 new cases to the tally today in its bleakest day since November 11 while daily deaths climbed above 200 for the first time since January.
With infection rates doubling in less than a fortnight, the spotlight has turned on a sluggish jab roll-out which has reached only three per cent of the population despite India being the biggest manufacturer of vaccines in the world.
Read more ….
WNU Editor: India is the biggest manufacturer of vaccines in the world. With infection numbers increasing there are now calls in New Delhi to limit or stop vaccine exports.
More News On India Facing A Second Wave As Covid Cases Surge
India reports most COVID-19 deaths since early January — Reuters
India coronavirus: Experts say sharp rise in Covid-19 cases 'alarming' — BBC
Indian states institute lockdowns amid COVID-19 spike, lagging vaccinations — UPI
India's COVID surge triggers fears of new wave — DW
India sees largest increase in coronavirus cases since 2020 — The Hill
Second COVID surge grips India on ‘people’s curfew’ anniversary — Al JazeeraOriginal Article