U.K. Ministry of Defence’s Command Paper Calls For Drastic Cuts In the Army

zekal3_3 4 weeks ago Videos, World Comments Off on U.K. Ministry of Defence’s Command Paper Calls For Drastic Cuts In the Army 10 Views 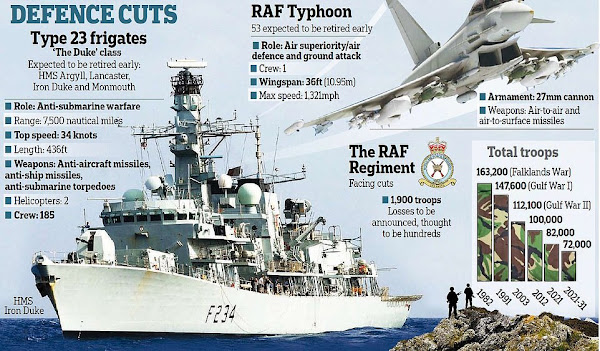 Daily Mail: Military chiefs warn the 'huge mistake' of slashing 10,000 troops from the Army will leave Britain 'very close to not being able to contribute' on the world stage and unable to fight two wars at the same time Defence Secretary Ben Wallace will today announce a major Government shake-up of Britain's Armed Forces
* Ministry of Defence's Command Paper is expected to include a 10,000 troop cut to the size of the UK's Army * Ex-US military chief Admiral Mike Mullen said the cut is a 'huge concern' and will leave Army 'pretty small' * Ex-head of Army Lord Dannatt said cut will mean UK can no longer fight two major operations at same time * Former British colonel Richard Kemp said cut a 'huge mistake' and could 'endanger defence of this country' * Publication of Command Paper comes amid political row over decision to increase size of UK nuclear arsenal
The former head of the US military today warned the UK will be 'getting very close to not being able to contribute' on the world stage if it goes ahead with a 10,000 troop cut to the size of the British Army amid mounting fury over the Government's defence shake-up.
Admiral Mike Mullen, ex-chairman of the US Joint Chiefs of Staff and the highest ranking US military officer between 2007 and 2011, said the expected cut is a 'huge concern'. He said slashing troop numbers by that much would leave the British Army 'pretty small' and roughly the same size as the US Special Forces.
Read more ….
WNU Editor: We shall see …. Joe Biden ‘unnerved’ as plans to cut British Army dubbed ‘real problem’ (Express).