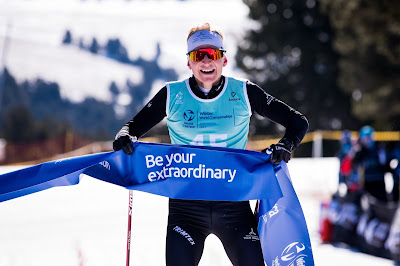 Naturlandia, the stunning natural park in Andorra, was the perfect host for the 2021 World Triathlon Winter Championship, with Norway showing an incredible performance as a team to grab three of the six gold medals on dispute this Saturday. Hans Christian Tungensvik (NOR) showed an incredible performance on skis to outrun Pavel Andreev (RTF), winner of the previous 8 world titles.

The 26 athletes vying for the world title lined up early morning with freezing temperatures (-7ºC) but the sun shining in the sky.

Italian Franco Pesavento decided to show his cards from the very beginning, going so strong on the run that literally no one was able to follow him. He managed to open a gap of almost 20 seconds in the first lap of the run, while Victor del Corral (ESP), Daniel Antonioli (ITA) and Eneko Llanos (ESP) were the only ones able to follow the frantic rhythm of the Italian.

Half way through the run -a 6,55km run done in four laps on a quite technical and hilly circuit-, the 8th times world champion, Pavel Andreev was easily running one minute behind the leaders, while Pesavento was flying, eager to get to the first transition, where he made it with over 30 seconds from the chasing trio. By then, the difference with the current World Champion was 1 minute 20 seconds.

The first km on the bike proved to be quite challenging for the triathletes, with a fast descent with some ice and turns that ended up showing which triathletes are more used to driving in the snow. Llanos, Xavier Jove (AND) and the athletes representing the Russian Triathlon Federation were the ones who took advantage of their cross triathlon and long distance experience. Behind the leaders, Pavel was gaining spots one by one, making sure that he will arrive at the second transition in a good position, close to the leaders, to show his skiing skills.

Also showing impressive skills on the bike were Guiseppe Lamastra (ITA) and Marek Rauchfuss (CZE), who had the fastest splits on the bike segment.

For the final segment over the skis, it only took one lap for Andrev to get to the first place, but what seemed to business as usual for him, turned out to be a magnificent display of power and skiing abilities from an outsider: Hans Christian Tungensvik, from Norway.

Competing on his first international winter triathlon, he positioned himself in second place on the first lap of the ski, to then pass Andrev with two laps to go and cross the finish line comfortably all by himself to grab the Winter Triathlon world title.

“I am incredibly happy”, said the Norwegian, a long distance athlete with a 8h40mins time on a few Ironman distance events that had never tried before winter triathlon until a month ago, when he claimed the National title and was selected to compete in Andorra. “I did not expect this. It is my first race of this level, so I knew I was in great shape, but had no idea of how the others were and how I will be compared with them. I love skiing, and this circuit was amazing. I would love to race more winter tri races for sure”, he said. Little did he imagine that he was going to be the first Norwegian medal today, but definitely not the last one. “I should have grabbed an Andorra cap before crossing the finish line to see if I can be sponsored by the Andorran government”, he said laughing, referencing his teammate Gustav Iden, who was sponsored by Taiwan after wearing a cap with their brand when winning the Ironman 70.3 World Championships.

The silver medal was for Andreev, while Lamastra claimed the last spot on the podium, to much delight of the Italian team. His teammate Pasavento finished in the fourth place, while the 5th position was for Rauchfuss.

In the U23 Male’s race, it was the young Italian Mattia Tanara who claimed the World title, after an impressive run that positioned himself in the first place of his category with almost two minutes’ difference with the chasers. His great skiing performance granted him the first place overall, followed on the finish line by Evgenii Evgrafov and Ivan Zalavtsev, both neutral athletes representing the Russian Triathlon Federation.

The Juniors had a shorter course, going for a 3,35km run, 4,8 bike and 4,55 ski course, that ended up with the Norwegian team showing that they have a serious commitment with Winter Triathlon and are investing not only on the elite category, but also on the youngsters. With only 16 years of age and with impressive skiing skiils, Sivert Ekroll (NOR) dominated the junior race from the beginning til the end, to cross the finish line all smiles stopping the clock on 37’17’’, to see his teammate Casper Ronning claim the silver medal. The third spot of the podium was for young Russian Yaroslav Kurilenok.

ReWatch the races on TriathlonLIVE!

The Bundestag approves the financing of Eurodrone

Conceptualized for twenty years, developed for five years and blocked for two years, the Eurodrone …