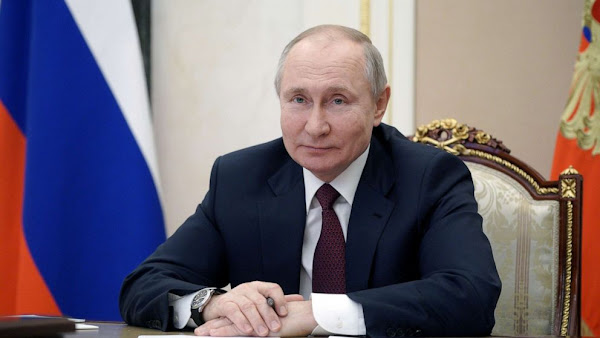 Russian President Vladimir Putin takes part in a meeting with community representatives and residents of Crimea and Sevastopol via a video link in Moscow, Russia March 18, 2021. Sputnik/Reuters
ABC News: Putin challenges Biden to debate after president calls him a 'killer'
Biden spoke out about the Russian president in an ABC News interview this week.
Russian President Vladimir Putin has reacted to President Joe Biden calling him a "killer" by challenging Biden to take part in a conversation with him broadcast live online.
“I’ve just thought of this now,” Putin told a Russian state television reporter. “I want to propose to President Biden to continue our discussion, but on the condition that we do it basically live, as it’s called. Without any delays and directly in an open, direct discussion. It seems to me that would be interesting for the people of Russia and for the people of the United States.”
Read more ….
WNU Editor: The White House has declined this Kremlin offer of a live debate …. White House shuts down Putin invite to public video chat, says Biden is ‘quite busy’ (NYPost).
What's my take. This only reinforces the Kremlin's belief that the US President is suffering from the early onset of dementia. Even the AP is starting to notice (and report) how senior leaders in Russia see the US President ….
…. Dmitry Medvedev, the deputy head of Russia’s Security Council who served as president in 2008-2012 when Putin had to shift into the premier’s job because of term limits, said that “time hasn’t spared” the 78-year-old Biden and cited Sigmund Freud as saying, “Nothing costs so much in life as illness and stupidity.”
And Andrei Turchak, the leader of the main pro-Kremlin United Russia party, described Biden’s remarks as a reflection of “the U.S. political marasmus and its leader’s dementia.” (AP link here).Original Article

Previous Is This The U.S. Air Force’s Next Fighter Jet?
Next U.S. Sanctions Chinese, Vietnamese, And UAE-Based Companies Over The Sale Of Iranian Petrochemicals