Questions and Anwers with Sam Carana

Above image shows a non-linear trend based on 1880-2020 NASA Land+Ocean data that are adjusted 0.78°C to reflect a pre-industrial base, to more fully reflect strong polar warming, and to reflect surface air temperatures over oceans.
The trend highlights that the 1.5°C threshold was crossed in 2012 (inset), while the 2°C threshold looks set to be crossed next year and a 2°C rise could be reached at the end of 2026.

Will temperatures rise over the next few years? Why? By how much?

Even if al emissions of greenhouse gases by people could magically end from one moment to another, temperatures would still continue to rise over the next few years. Reasons for this rise are listed below, and it is not an exhaustive list. By implication, there is no carbon budget left. Pretending that there was a carbon budget left, to be divided among polluters and to be consumed over the next few years, that suggestion is irresponsible.
• The warming impact of carbon dioxide reaches its peak a decade after emission, while methane's impact over ten years is huge, so the warming impact of the greenhouse gases already in the atmosphere is likely to prevent temperatures from falling and could instead keep raising temperatures for some time to come.
• Temperatures are currently suppressed. We're in a La Niña period, as illustrated by the image below. 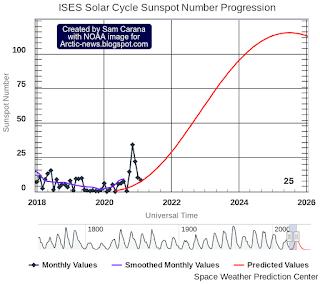 • We're also at a low point in the sunspot cycle. As the image on the right shows, the number of sunspots can be expected to rise as we head toward 2026, and temperatures can be expected to rise accordingly.
• Add to this the impact of a recent Sudden Stratospheric Warming event. We are currently experiencing the combined impact of three short-term variables that are suppressing the temperature rise, i.e. a Sudden Stratospheric Warming event, a La Niña event and a low in sunspots.
Over the next few years, in the absence of Sudden Atmopsheric Warming events, a huge amount of heat could remain present at surface level. As the temperature impact of other short-term variables reverses, i.e. as the sunspot cycle moves toward a peak and a El Niño develops, this could push up temperatures substantially. The world could be set up for a perfect storm by 2026, since sunspots are expected to reach a peak by then and since it takes a few years to move from a La Niña low to the peak of an El Niño period.
• Furthermore, temperatures are currently also suppressed by sulfate cooling. This impact is falling away as we progress with the necessary transition away from fossil fuel and biofuel, toward the use of more wind turbines and solar panels instead. Aerosols typically fall out of the atmosphere within a few weeks, so as the transition progresses, this will cause temperatures to rise over the next few years.

• Also holding back the temperature rise at the moment is the buffer effect of thick sea ice in the Arctic that consumes heat as it melts. As Arctic sea ice thickness declines, more heat will instead warm up the Arctic, resulting in albedo changes, changes to the Jet Stream and possibly trigger huge releases of methane from the seafloor. The rise in ocean temperature on the Northern Hemisphere looks very threatening in this regard (see image on the right) and many of these developments are discussed at the extinction page. There are numerous feedbacks that look set to start kicking in with growing ferocity as temperatures keep rising, such as releases of greenhouse gases resulting from permafrost thawing and the decline of the snow and ice cover. Some 30 feedbacks affecting the Arctic are discussed at the feedbacks page.
• The concusion of study after study is that the situation is worse than expected and will get even worse as warming coninues. Some examples: a recent study found that the Amazon rainforest is no longer a sink, but has become a source, contributing to warming the planet instead; another study found that soil bacteria release carbon dioxide previously thought to remain trapped by iron; and yet another study found that kelp off the Californian coast has collapsed.

Where do we go from here?

The same blue trend that's in the image at the top also shows up in the image on the right, from an earlier post, together with a purple trend and a red trend that picture even worse scenarios than the blue trend.

Previous World Triathlon to restart Olympic & Paralympic rankings on 1 May, 2021
Next International arms transfers level off after years of sharp growth

Agriculture, land use and forestry responsible for half of people's greenhouse gases emissions?The image on …