zekal3_3 2021-03-19 Videos, World Comments Off on Kremlin Snubs US President Biden At The UN By Only Sending A Junior Diplomat To A Virtual Summit With The US President 11 Views 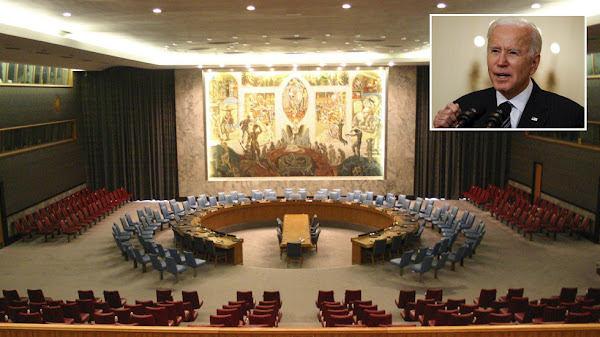 The United Nations Security Council Chamber in New York © Wikipedia; (inset) US President Joe Biden © REUTERS / Carlos Barria
RT: As tensions escalate over ‘killer-gate’, Moscow snubs Biden at UN, only sends junior diplomat to virtual summit with US president
Russia was the only nation that refused to send its top UN representative to talks with US President Joe Biden on Thursday, electing instead to dispatch a junior envoy, as a diplomatic row between Moscow and Washington worsens.
President Biden had invited permanent representatives from the United Nations Security Council, on which Moscow has continuous representation, to discuss his country’s “commitment to values-based global leadership.”
In addition, the president called for action on crises in regions across the world, including Myanmar, Ethiopia, Syria, and Yemen.
Read more ….
WNU Editor: You do not have to be a Kremlin watcher or someone who follows international news and politics to know that the Kremlin (and the Russian media) are having fun with all of this.
From having Turkish President Erdogan condemning President Biden's remarks …. Turkish leader Erdoğan slams NATO ally Biden for calling Putin a ‘killer,’ says US president's remarks were ‘truly unacceptable’ (RT), to having former Olympic figure skating medalists wading in …. ‘I’m overwhelmed with pride for our president’: Olympic figure skating champion Tatyana Navka wades into Putin-Biden ‘killer’ row (RT).
Groan!!! Everyone is giving their opinion.Original Article