In One Week Of Diplomacy The Biden Administration Is Now Waging A War Of Words With China, Russia, And North Korea

zekal3_3 2021-03-19 Videos, World Comments Off on In One Week Of Diplomacy The Biden Administration Is Now Waging A War Of Words With China, Russia, And North Korea 11 Views 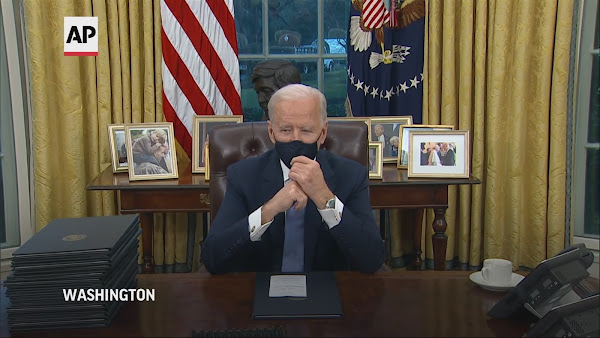 U.S. President Biden in the Oval Office
David Brennan, Newsweek: Joe Biden Admin Enters War of Words with China, Russia, and North Korea
In a busy week of foreign policy developments, President Joe Biden and his top officials have engaged in tense exchanges with China, Russia and North Korea, all as the White House looks to bolster America's historic alliances and push back against pressure from authoritarian regimes.
Biden is juggling his commitment to diplomacy and multilateralism with his vow to push back on the world's dictators, figures he and his allies argue former President Donald Trump did too little to rein in.
Secretary of State Antony Blinken and Secretary of Defense Lloyd Austin traveled to Japan and South Korea this week, expressing shared concerns over Chinese and North Korean regional aggression.
But the trip prompted threats from Pyongyang, which a senior administration official told Newsweek has not responded to any American diplomatic outreach for more than a year.
Read more ….
WNU Editor: This follows on the heels of the U.S. alienating its ties with its allies in the Middle East that has resulted in an embolden Iran and its proxies to escalate the war in Yemen. Enraging Central American governments with a defacto open border policy that is now resulting in a massive migration of people throughout the region (link here and here). And causing real economic harm to Canada with the cancellation of critical pipelines and buy American policies.
Makes you wonder on who is next? And more to the point. Who is making these foreign policy decisions?Original Article

Previous U.S. Defense Secretary Austin Tells North Korea That The US Is Ready To ‘Fight Tonight’
Next North Korea Cuts Diplomatic Ties With Malaysia Over The Extradition Of One Of Its Citizens To The U.S.