zekal3_3 2021-03-19 Videos, World Comments Off on A Brief List Of Official Russia Claims That Proved Later To Be Bogus 14 Views 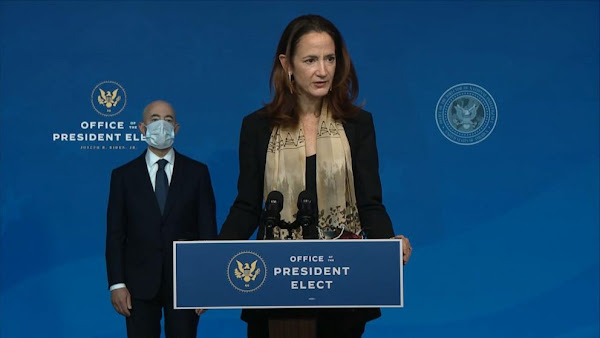 Director of National Intelligence Avril Haines
Matt Tabbi: Aaugh! A Brief List Of Official Russia Claims That Proved To Be Bogus
The Director of National Intelligence releases a report, and the press rushes to kick the football again.
The Office of the Director of National Intelligence (ODNI) has released a much-hyped, much-cited new report on “Foreign Threats to the 2020 Elections.” The key conclusion:
We assess that Russian President Putin authorized, and a range of Russian government organizations conducted, influence operations aimed at denigrating President Biden’s candidacy and the Democratic Party, supporting former President Trump, [and] undermining public confidence in the electoral process…
The report added Ukrainian legislator Andrey Derkach, described as having “ties” to “Russia’s intelligence services,” and Konstantin Kilimnik, a “Russian influence agent” (whatever that means), used “prominent U.S. persons” and “media conduits” to “launder their narratives” to American audiences. The “narratives” included “misleading or unsubstantiated allegations against President Biden” (note they didn’t use the word “false”). They added a small caveat at the end: “Judgments are not intended to imply that we have proof that shows something to be a fact.”
Read more ….
WNU Editor: What has not helped is the mainstream media. They have been useless in investigating and uncovering these bogus claims …. How Do Big Media Outlets So Often "Independently Confirm" Each Other's Falsehoods? (Glenn Greenwald).
Or as Glenn Greewald enjoys to say (see below). 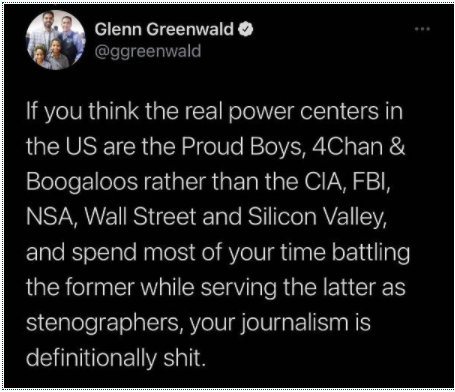