Islamists Prime Suspects In Massacre That Killed 58 In Southwestern Niger 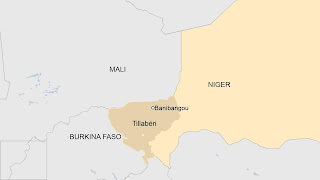 BBC: Niger attacks: More than 50 killed in attacks near Malian border
At least 58 people have been killed in Niger after attacks near the border with Mali, the government has said.
Gunmen opened fire on four vehicles that were bringing people back from a market in the Tillabéri region.
No group has claimed the attacks, which happened on Monday.
However, there are currently two jihadist campaigns in Niger – one in the west near Mali and Burkina Faso, and another in the south-east on the border with Nigeria.
Read more ….
More News On Monday's Massacre Of Civilians In Niger
Gunmen kill at least 58 in attack on Niger market sellers — AP
At least 50 killed by armed men in southwestern Niger, government says — France 24
Motorcycle gunmen kill at least 58 civilians on market day in Niger — The Guardian
Armed men attack passenger convoy in Niger, kill 58 — ABC News (Australia)Original Article