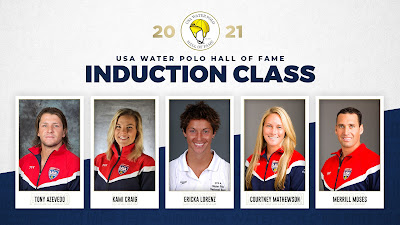 Irvine, CA – March 16, 2021 – USA Water Polo is proud to announce the 37th induction class for the USA Water Polo Hall of Fame. All those from this year's five-member class are Olympic athletes who've combined to win nine medals competing in a total 15 Olympic Games.

Tony Azevedo, a record five-time Olympian and 2008 Olympic silver medalist, is joined in the class by his Beijing medal winning teammate and three-time Olympian Merrill Moses. A member of the first-ever women's Olympic water polo team, Ericka Lorenz—also a two-time medalist at the Games—will be inducted alongside two members of the next generation. Three-time Olympic medalist and two-time Gold medalist Kami Craig enters the hall with her golden teammate from London 2012 and Rio 2016, four-time NCAA champ Courtney Mathewson.

More information on the Hall of Fame Induction Luncheon will be shared when available. To learn more about the Hall of Fame, including a look at all the past inductees, click here.

Congratulations to all the inductees!

Considered perhaps the greatest men's water polo player the United States has ever seen, Tony Azevedo's career almost never happened. Born in Brazil, Azevedo overcame a life-threatening neck injury as a child to emerge from water polo-rich Long Beach, CA, under the guidance of aquatic legends like Klaus Barth. Taught the finer points of the game by his dad, Ricardo—a longtime player and coach at the National Team level—Tony served as a ball boy at the 1996 Olympic Games in Atlanta, a moment that foreshadowed what was to come. On the heels of a dominant prep career at the storied powerhouse Long Beach Wilson, Azevedo made his Olympic debut as a player in the 2000 Sydney Games, just months removed from his senior prom. The 18-year-old Azevedo then embarked on a transformational run with Stanford University that saw him win two NCAA championships and set an almost certainly unbreakable record of four-straight Cutino Award honors as the college game's best player. He returned to the Olympic Games in Athens in 2004 while launching an international club career that spanned more than a decade capping up for top clubs across Europe and Brazil including JUG, CAN Bissolati, and JK Primorac among others. Domestically, Azevedo hauled in countless titles for the New York Athletic Club. In 2008, he captained a U.S. team that returned to the Olympic podium for the first time in 20 years, claiming a Silver medal at the Beijing Games. He continued to serve as captain at the next two Olympic Games, culminating his career in a full-circle moment back in Rio de Janeiro in 2016. A five-time Pan American Games Gold medalist, Azevedo added FINA World League Silver medals and ended his career as the all-time leading scorer in FINA World Championship history. He remains entrenched in the game as co-founder of 6-8 Sports—which merges water polo and technology—conducting camps and clinics around the country.

By Olympic water polo standards, Merrill Moses got a late start in his favorite sport. As a teenager Moses made the switch from the football field to the pool and never looked back. He brought the bravado and confidence of a star quarterback as a goalkeeper to Team USA in a career that spanned over 15 years. An All-CIF selection at Peninsula High School in California, Moses headed to Pepperdine University for college, launching a lifelong bond with Waves head coach and water polo legend Terry Schroeder. The brash Moses promised to win the starting goalie spot as a freshman…and did. Two years later he guarded the cage as Pepperdine claimed the 1997 NCAA Championship. Not long after, he started competing with Team USA but after being the final cut for the 2004 Olympic roster, Moses stepped away from the game. Two years later Schroeder—then a member of the Team USA staff—lured him out of an office and back to the water and the two teamed up for history in 2008. Frequently repeating a promise to "shock the world,"Moses turned in a goalkeeping performance for the ages as the ninth-ranked Americans surprised everyone with a Silver-medal finish. He'd go on to start in goal for Team USA at the 2012 and 2016 Olympic Games, adding three Pan-American Games Golds and two FINA World League Silver medals to his resume. Abroad Moses capped up for professional clubs in Spain, Italy, and Croatia while earning multiple titles at home for the New York Athletic Club. He launched his collegiate coaching career in 2012, returning to his alma mater. Serving as associate head coach, once again alongside Schroeder, Moses most recently helped the Waves claim Golden Coast Conference championships in 2016 and 2019 while reaching the NCAA Championship semifinals in 2019.

An absolute force at the two-meter position, Kami Craig is considered one of the best centers ever in an international career that spanned 10 years with Team USA. Hailing from the Santa Barbara area, which is well known for producing strong women's water polo players, Craig quickly emerged as a talent to watch in the National Team pipeline. Kami credits her resilience and tenacity to the diagnosis of her learning differences at an early age, and she became a fierce advocate for herself in the classroom while carving out a legendary career in the pool. At USC Craig became the top player in the country, twice winning Cutino Award honors as the college game's MVP. At the same time, her National Team career got off to a great start as she claimed a FINA World Championship in 2007 as a teenager. The next year, as the youngest member of Team USA, Craig was part of a Silver-medal effort at the 2008 Beijing Games. While it was a stinging result for the heavily favored Americans, the result only galvanized her dedication to the red, white, and blue. From there the titles would stack up in rapid fashion. In 2009 a second World Championship arrived in Rome, and she capped her career with the Women of Troy to the tune of a NCAA title in 2010. In 2012 Craig played a major role in a breakthrough effort for Team USA: the program's first Olympic Gold medal. Most notably, Craig delivered pivotal goals in a semifinal victory to keep the Gold-medal dream alive. She followed that performance with another World Championship in 2015 and then finished her international career with a second-straight Olympic Gold at the Rio de Janeiro Games in 2016. The final staggering tally of championships saw Craig add three Pan American Games titles, two FINA World Cup titles, and nine FINA World League Final crowns to her Olympic and World title hardware. A member of the Pac-12 All-Century Team, Craig carved out a strong club career at home with the New York Athletic Club, winning multiple titles while also capping up abroad for the likes of Firenze and Olympiacos. Never far from the pool deck, Craig stays engaged with water polo by conducting camps and clinics while mentoring young athletes from a variety of sports.

The ultimate sharpshooter, Courtney Mathewson's perimeter accuracy combined with a fearless determination made her a vital piece of the USA Women's National Team from 2010 to 2016. The only thing as consistent as Mathewson's shot was her winning record. Arriving at UCLA in the mid-2000s out of Anaheim Hills, Mathewson comfortably transitioned from a smaller high school program to the most dominant women's program of the moment. Her focus in Westwood was singular, and Mathewson avoided National Team overtures on her way to winning four-straight NCAA crowns under Head Coach Adam Krikorian. In 2008 Mathewson won the Cutino Award as the college game's top player and embarked on a professional career in Spain. A year later Krikorian took over the controls for Team USA and Mathewson began training with the reigning World Champions in 2010. After helping the squad to its first FINA World Cup crown in 31 years that summer, Mathewson cemented her spot in Team USA lore in 2011. On the brink of elimination in the 2011 Pan American Games' Gold-medal match with Canada, Mathewson willed the team back with three second half goals to force a shootout where the United States prevailed, allowing them to qualify for the 2012 Olympics. A year later, Mathewson helped Team USA reach the top of the podium, claiming the program's first Olympic title. The squad followed with another World Cup crown in 2014 and a FINA World Championship in 2015. Mathewson wrapped her career with a second-straight Olympic crown at the Rio de Janeiro Games in 2016. Her winning ways included a second Pan Am Games Gold and six FINA World League titles. A Pac-12 All-Century Team selection, Mathewson competed domestically for the New York Athletic Club, earning multiple titles there. She's stayed close to water polo conducting camps, clinics, and swimming lessons in southern California.

A multi-sport star as a teenager in the San Diego area, Ericka Lorenz might have been just as successful on the softball field or volleyball court where she earned All-American and All-CIF honors respectively while at Patrick Henry High School. Luckily for water polo, "Monkey" (as she was known among teammates) chose the pool—and at precisely the right time. Tabbed as an emerging star in the National Team pipeline, Lorenz didn't put much immediate stock in being invited for a tryout with Team USA in the fall of 1999 just as she was launching her collegiate career with the University of California, Berkeley. However, her senior team performance went so well that she put college on hold while contending for a ticket to the 2000 Olympic Games, the first to feature women's water polo. Just 19 years old, Lorenz was part of that history-making squad that claimed Silver in Sydney, helping build the foundation for what has become the most dominant program in the world. Lorenz then returned to Cal and fast became a top player nationally, racking up 81 goals in two seasons. She also remained entrenched with Team USA, and in 2003 was part of the first FINA World Championship in program history. That led to a second Olympic Games appearance in 2004, where the squad earned Bronze in Athens. As her international career accelerated, Lorenz launched her club career abroad as well, competing with the likes of Ortigia-Siracusa in Italy. She battled through injuries to take part in a banner year with Team USA in 2007 as the women claimed another FINA World Championship, another Pan American Games title, and qualified for the 2008 Beijing Olympics—all without losing a single match. An attempt at a third-straight Olympic Games for Lorenz was unfortunately halted due to shoulder and knee injuries leading to her retirement in 2008. But her mark was most definitely left on the squad as a dynamic player who helped usher in a new era for women's water polo internationally. She's remained close to the water these days, initially as a lifeguard in Huntington Beach, CA, and now serving as an Ocean Lifeguard Specialist for Los Angeles County.

USA Water Polo, Inc., is the national governing body for water polo in America, overseeing our United States Olympic program as well as 20 different championship events annually, such as Junior Olympics and Masters National Championships. With more than 50,000 members, USAWP also is the sanctioning authority for more than 500 member clubs and more than 400 tournaments nationwide. USAWP is committed to the development of the sport throughout the U.S., fostering grass-roots expansion while providing a national system of affiliated clubs, certified coaches, and officials. For more information, visit www.usawaterpolo.org.