Saved by The Players Championship: A Lesson in Humility After Vaccine #2

zekal3_3 2021-03-16 Sports, World Comments Off on Saved by The Players Championship: A Lesson in Humility After Vaccine #2 27 Views

The only reason I didn't sign up for a Sunday tee time is because I wanted to watch the final round of The Players' Championship. I didn't see much of the first two rounds and on moving day, I played nine holes before heading to the Oakland Coliseum to get my second dose of the COVID-19 vaccine. Thank you, FEMA. Thank you, Pfizer. And thank you, TPC Sawgrass!

To me, this tourney, "the fifth major," lives up to the hype. Between the island green and so many other dramatic, demanding holes the players themselves are really put to the physical and mental test of this great game. Furthermore, a win at The Players gives much more than a $2.7 million prize (from a overall purse of $15 million); it affords a five-year exemption on the PGA Tour (formerly ten years), a three-year invitation to the Masters, three-year exemptions for the U.S. Open and The Open Championship, and an exemption to the next three PGA Championship. In short, there is a reason the who's who in golf—this year, 49 of the top 50 players—put a lot of skin in the game.

I turned on my television hoping that Lee Westwood would win it all. The 47 year old Englishman is one of three players on the tour who has been number one in the world and never won a major. I love that he is my age and that his caddy is female; Helen Storey is also his fiancee. 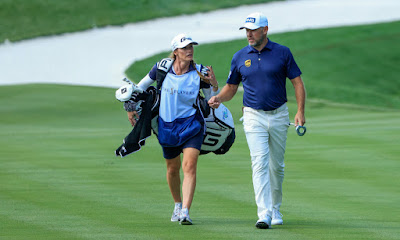 I laid on the couch and could barely move my arm. Fortunately, my remote control has voice activation 😉 As a teacher who gets the flu shot every year, I anticipated a sore arm after the first and the second dose of the vaccine. Check and check. But this pain was tremendous. My arm was heavy and extremely tender. At certain points in the day, I was unable to even lift it.

I watched the front nine of the leaders in relative discomfort and as the intensity on the course heated up, so did every last side effect listed by the CDC. Nausea. Chills. Fever. Body Ache. My own misery was growing. I started to just surrender to sleep. As much as I wanted to see Justin Thomas fly out of his shoes as he tees off, I could barely stay awake…and if I did, I found that my headache only throbbed more.

The thrill of competition couldn't fully distract me from my worsening condition. I told myself every last line of personal motivation I have ever used as an athlete. Just get through this. Pain is temporary. Stay strong. In 24 hours from now… I drank sips of water to stay hydrated. I added more layers to stay warm. I reached out to a few friends for encouragement and repeated to myself—ride this out. 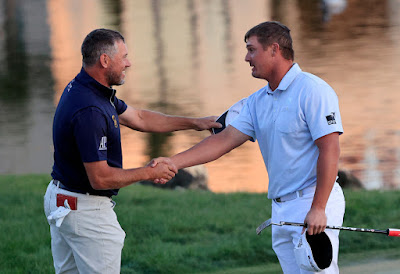 I woke up to see the last few of what was, once again, great golf. How I love that look… exhausted athletes bringing it in and finishing strong. Smiling because they did their best and taking some satisfaction in that. Cant' be easy to do.

I knew Justin Thomas would be asked about losing his grandfather, Paul Thomas. Paul Thomas who died just five weeks ago, was a longtime head golf professional. As written in the Palm Beach Journal, he "would have been proud at how his grandson overcame a start in which he was outside the cutline after the first 27 holes and recovered to card a 64-68 on the weekend on the way to a 14-under 274 for the tournament, one shot better than ageless wonder Lee Westwood.

Thomas recalled how his grandfather, aged 89, was at the forefront of his mind as he sealed the win. “I think about him every day but thought about him this morning and then I think when I saw my dad walking up 18 — that was the first time during or since I teed off on one when I really thought about him,” said the 27-year-old Thomas. 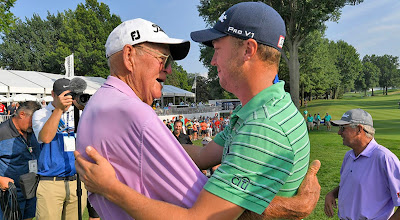 Thomas, got so emotional he had a difficult time trying to say how much his grandfather meant to him and how he wished he could talk to him. As Justin shed tears, it was hard not to shed my own. My pain, though real, was very different. This day certainly brought with it a wide range of emotions. To you, is that good or bad?

I was told at the FEMA site to wait 24 hours before taking Tylenol but I couldn't wait any longer. At 22 hours and counting, I took two, and fell asleep for another two hours. Although I wanted to throw up, I willed myself to keep it down so the medicine could work. It did.

When I woke up, I felt like a human being again. Though drained of energy, the Tylenol broke my fever and abated my acute body ache. My chills were gone and I was ready for Chicken Noodle Soup. I had the slightest of appetite and realized, I finally turned the corner. I could say "tomorrow will be better" and actually believe it. #Humility

While many people have posted pictures of getting the shot, holding their vaccination card, there is nothing that can or will capture my sentiments of the second shot. While most people are celebratory and grateful, I have been humbled. I still feel that way. My perspective on all of it has changed. 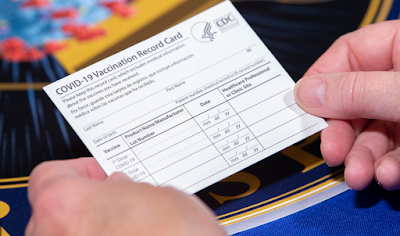 I am still not 100%. I had every last side effect reported by the CDC. My reaction was severe and I wouldn't wish it on anyone, but I also know countless of Americans have been at risk for the actual disease this vaccine was preventing me from for a full year now. Though I don't know many personally, too many men and women have died from COVID-19. Some died alone, others died in hospitals, and all because what I got on Saturday wasn't available.

I think if a friend had pushed me to play golf on Sunday, I might have. And that would have made what was bad, far worse. Anytime I get sick, I am humbled by what the human body can do and what it feels like to be broken. Physical pain consumes your psyche. It takes the joy out of what we love most—like a great tourney. But it can't and never will break us from the strongest of emotions: empathy as a 27-year old man cry tears of joy and grief. Gratitude for the weight that has been lifted in becoming fully vaccinated. Appreciation for those who care for me and wish for my healing. Inspiration at those who are working tirelessly to get the vaccine into our arms.

Please know, if you have any side effects from the second dose, I am HERE to send words of advice and encouragement. And if you don't, enjoy another round of golf!

The 2021 Players Championship was the backdrop for another leg in the COVID-19 journey. Many graces and many struggles. Different types of pain and tears. The finish line for this particular race closes in. Let's cheer for one another to cross that finish line. Peace.