Can China Feed Itself? 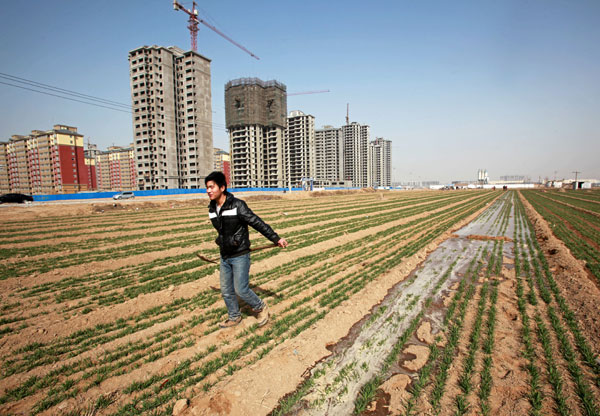 A farmer irrigates a field of wheat at Suizhuang village in Huaxian country. Henan province. Nearly, residential buildings are being built for villagers as part of a rural urbanization drive. [Photo/China Daily]
Gordon G. Chang, Newsweek: Watch Out: China Cannot Feed Itself
Consider U.S. farmers happy. They are exporting record volumes of products to China. Shipments of soybeans, corn and pork are bringing smiles back to the American heartland.
Or, to put this another way, Beijing is effectively acknowledging it cannot feed the Chinese people.
China's leader, Xi Jinping, recently made such an admission. Last August, he announced what became known as the "clean your plate" campaign to end what he called a "shocking and distressing" waste of food. Just about everyone saw this effort, to get the Chinese people to eat less, as a warning of food shortages to come.
Chinese officials will not formally admit China is becoming increasingly dependent on foreign food—that would be political dynamite—but it is now apparent that the country needs to buy foodstuffs from abroad.
Read more ….
WNU Editor: Feeding its people has always been China's Achilles Heel, and in my first trip to China in the mid-1980s I quickly discovered why. Massive soil erosion coupled with a disastrous water supply system that was also heavily polluted …. to put it more bluntly …. I quickly learned to not drink the water, and to be careful on what I eat.
That was 35 years ago, and I know the situation has gotten worse.
Gordon Chang is right about the Yangtze River drying up. If the current trend continues within a decade an environmental and agricultural disaster will be in the making, and I shudder on what Beijing will decide to do.
China has achieved a lot since my first visit. The country has become a modern state, with hundreds of millions lifted from poverty. But it has come at a tremendous cost.
This also reminds me of what a senior Chinese leader told me when I was working in China in the 1980s when I asked him about the country's one-child policy. He said it was necessary to bring the population of China down to 650 million. To him that was the maximum number of people that China could feed with the resources that it had. Considering what is happening today, he may be right.Original Article