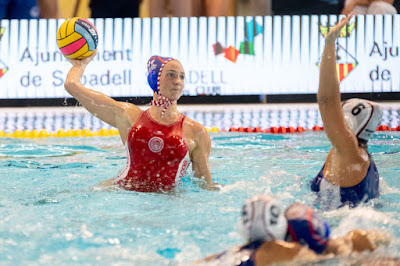 Winners of the last four editions, 2016 and 2019 champion Sabadell and 2017-18 victor Kinef Kirishi failed to reach this year’s Final Four as they fell short in their respective quarter-finals against Olympiacos and Uralochka. Two Hungarian teams joined the top flight in the evening, Dunaujvaros and UVSE, a historical feat as it will be the first time that two Magyar sides play for the most coveted trophy.

Winners advanced to the Final Four – losing sides will play in the LEN Trophy Final Four.

The ‘early afternoon session’ couldn’t have been any more exciting. The re- match of the 2019 final between Sabadell and Olympiacos already produced a brilliant contest two weeks ago when the Spaniards managed to beat the Greeks once more and gained a two-goal lead. Now, after a low-scoring first half (3-2) the hosts netted two action goals in 47 seconds late in the third to go 6-3 ahead but the Spaniards could pull one back before the last break. After an early exchange of goals the aggregate score was still even at 7-5 but then Olympiacos staged a fantastic finish. They shut out Sabadell in the last 6:39 minutes while netting three goals to claim a big win and a place in the Final Four again.

In the all-Russian derby Uralochka had stunned favourite Kinef in Kirishi in the first leg – they had led by five goals and could save three till the end. While it still had looked like a great result, it turned out that Kirishi was far from giving in though for a while their efforts did not bring the desired result. After jumping to a 1-3 lead in the first, the home side climbed back and kept the score around even for most of the time. With 3:56 to go it was still 7-7 but just like in Athens, a fantastic 0-3 surge from Kinef – with a goal from Evgeniya Ivanova 0:01 from time – sent the players to the 5m line as the penalties decided the outcome. The first round ended at 3-3, in round 7 both goalies managed to catch the respective shots, then another save from Evgeniia Golovina in the 9th round ended the contest and secured Uralochka’s berth in the F4 – for the first time since 2007. At the same time, Kirishi will miss back-to-back Euro League F4s – ever since they had reached their first finals in 2005, this never happened to the team which could not make the cut only in three years (2008, 2014 and 2019).

Then came the ‘Margaret Island session’ – both matches featuring a Hungarian side were played in the famous indoor pool of the Alfred Hajos Complex. The first started from equal terms as Dunaujvaros and Roma played an 11-11 tie in the Eternal City. Now the hosts took control immediately, in the first half only goalie Fabiana Sparano kept the Italians in the match (it stood 5-3) – but in the third she couldn’t help either as the Magyars jumped to an 8-3 lead. Though it seemed to be over but a missed penalty and a wasted 6 on 4 from the hosts and three goals from connecting possessions by the Romans created some excitement with 3:15 remaining at 8-6. But Gerda Brezovszki’s double in 42 seconds killed the Italians’ momentum and sent Dunaujvaros to the top four for the first time since 2006.

UVSE began the return leg from a comfortable position as the Hungarian champion earned a three-goal advantage in Mataro. However, the Spaniards fought hard and after falling 2-0 behind early one, they came back to 3-3 and had a couple of chances to go ahead. The home defence did a fine job, though, shut out their rivals in the second quarter and could score a late goal to go 4-3 ahead by halftime. While it was quite an even match, Mataro went on struggling in front and was able to score again after 17:30 minutes – na agonisingly long period for a team which tried to make a miracle. The Magyars weren’t flying high either but scored a couple of man-ups to feel themselves in safe. The fourth saw an unusual approach from the visitors, they went all-in and started playing 7 on 6 immediately with the goalkeeper also attacking. It worked somewhat as they could come back to 9-9 after being 8-5 down (conceded only one goal to the empty net from 20m), but it did not count in aggregate and UVSE missed penalty in the last second didn’t count either. It means that the Hungarians return to the Final Four after 2016 when they finished runner-up.

LEN shall allocate the respective F4s in March, the draws will be conducted after the hosts are announced.