Who Is Winning The Hypersonic And Directed-Energy Weapons Race In The Asia-Pacific?

zekal3_3 2021-03-15 Videos, World Comments Off on Who Is Winning The Hypersonic And Directed-Energy Weapons Race In The Asia-Pacific? 12 Views 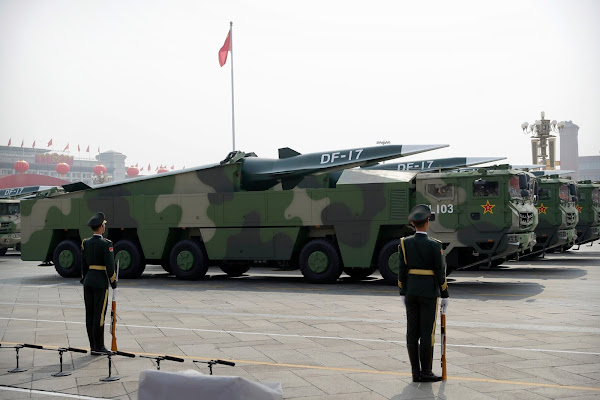 Chinese military vehicles carry DF-17 ballistic missiles during a parade in Beijing on Oct. 1, 2019. (Mark Schiefelbein/AP)
Defense News: Hypersonic and directed-energy weapons: Who has them, and who’s winning the race in the Asia-Pacific?
MELBOURNE, Australia, ISLAMABAD, NEW DELHI, and WASHINGTON — A number of countries in the Asia-Pacific region are caught up in the global hypersonic and directed-energy weapons race, with these regional powers having either developed or publicly stated intentions to develop such technology.
Defense News has contacted regional government and military officials, businesses, and analysts to find out who is keeping pace in the worldwide contest.
Read more ….
WNU Editor: At the present moment no one is winning these races. But the 3 major players are India, China, and Japan. But if Russia deploys their hypersonic arsenal to the Far East, they will be the dominant power in this region …. Two down, more to go? With hypersonic weapons already in the field, Russia looks to improve features (Defense News).Original Article

Previous U.S. Coast Guard Has Gotten Increasingly Active In The Western Pacific
Next China Pushes To Have Nuclear Aircraft Carriers